Being the last of November, the weather is thinking ahead to winter here in the DC area. That sometimes means an appearance of mice into our homes. So the other evening, while peacefully watching a movie in the family room, I saw one run around the corner of a sofa. It was startling and somewhat embarrassing. Something had to be done. 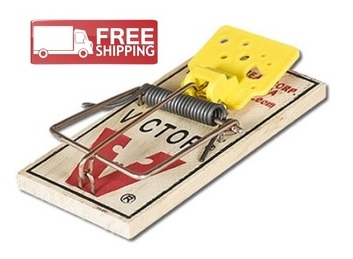 When I think of catching mice, I think of the wooden Victor brand mouse trap that you bait with cheese. You bait it carefully, especially after you’ve attached the cheese to the small bait holder and you bend the wire frame back over and secure it with the flopping metal pin. If you’ve done this before and had a trap spring on you and scare you half to death, you be sure you hold the trap from the harmless end and not the end that catches the mouse. To have a finger caught in a snapping mouse trap would not be fatal, but would hurt like hell. Which is considerably more than you would want something to hurt.

Our local supermarket did not have any wooden Victor brand mouse traps. They had a strange round plastic thing I bought two of because there was nothing else. The plastic things have caught no mice. It is unclear to me how they would ever do so. If someone thought this was a better mouse trap, then this is a case where better isn’t better and is actually silly.

The local hardware chain store did not have wooden Victor brand mouse traps either.  Instead they had “catch and release” mouse traps. You are supposed to trap your mice, transport them somewhere, and release them unharmed. The instructions do not suggest where this might be: a neighbor’s yard, the school playground, hardware store where you bought these traps, the desk drawer of a co-worker–use your imagination.

I love most animals and am opposed to the cruel treatment of animals. But the idea of catch and release as applied to mice that take up residence in my private home raises issues. Am I also obligated to catch and release termites, roaches, stinging wasps, bed bugs, and poisonous snakes? Yes, in theory these are all god’s creatures, along with the mice. But I don’t want them in my home. My neighbors don’t want them in their homes, either. Catch and release makes no sense. I will not attempt to bother these creatures in other locations, but if they invade my living space I will do away with them if I can.

I’m sure that whoever believes we should catch and release mice is a good and well-intentioned person. I would actually love to speak with such a person and suggest a future project. The project I have in mind relates to the killing of fellow human beings.

We now have laws in an increasing number of states that permit you to kill someone who feels threatening to you, someone in your yard perhaps, or passing by, or even walking in your neighborhood. These are known as “stand your ground” laws and they can allow people to get away with murder.

My plainspoken Tennessee friend put it this way: “If you ever need to get rid of a black guy, just take him to Florida and shoot him.”

That should be more troubling than the use of traps that kill mice in the home. It should trouble us that we would treat animals like people while treating people like animals.

By the way, you can still find the original wooden mouse traps.  Just Google on the words “victor,” “mouse,” “trap,”and “wood.”