Our state has finally passed a law making it a primary offense to not wear a seatbelt when driving your car. That means they can stop you and give you a fine without any other reason. Not wanting to be stopped and given a fine I have been trying to train myself to always buckle up. I put a yellow velcro strap around my steering wheel when I park the car. This reminds me to put on the seat belt when I get back in the car to start driving. 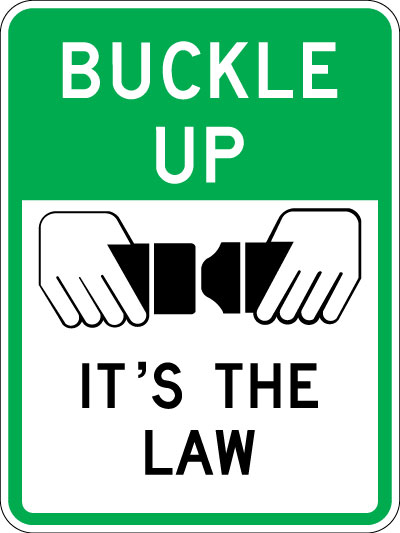 When I tell you that I have not done this very gladly, you will wonder what is wrong with me. Shouldn’t I be happy that people are looking out for my welfare and making laws that force me to do things for my own good? They say that seat belts save lives and that they want to save mine. They want to keep me from hurting myself.

Currently they are also working to pass laws about using cellphones in the car. This will also keep people from hurting themselves and others. Perhaps someday it will also be illegal to drive while eating a sandwich or drinking coffee. Or fiddling with the GPS. Or listening to the radio. Perhaps someday we will be required to wear crash helmets while driving, like the NASCAR drivers all do. That would save lives too. So would wearing those fire-resistant coveralls.

If it seems that I am being ridiculous here, I submit that the same rationale for requiring a seat belt also applies to requiring a crash helmet. A large percentage of automobile crash injuries involve head injuries. These would be greatly reduced by a mandatory crash helmet law. No one can reasonably deny that. So if we want a society that passes every law that can possibly keep people from hurting themselves, this should be on the list.

When I visited Cape Town, South Africa, I rode the cable car up Table Mountain and hiked around with all the other tourists. Besides the breathtaking views, the thing that struck me was that the mountain top had been left in its natural state. There were no fences or ropes or barriers to keep you from the cliff top edges. I don’t even remember a lot of warning signs.  This was in contrast to a park my family used to visit which we named “The Do-Not Park.” Everywhere you went in the park there were signs warning you what not to do there.

There are two main entrances to the Great Smoky Mountains National Park on the Tennessee side. Gatlinburg is the main one, but my favorite is the less traveled one at Townsend. Just inside the park at the Townsend entrance is a beautiful swimming hole we always called “The Y” because there the park road forks in two directions. When I was a young boy there were two things we loved to do at this swimming hole. We would try to swim upstream against the rushing current and see how far we could get. And we would climb up the steep cliff on the far side, as high as we dared, and dive down into the clear deep water. In the summer there was often an audience gathered on the bank to watch this diving. Young boys impressed a lot of young girls here.

This diving has gone on for generations, but now it is no more. Now there is a park sign on the side of the cliff saying it is illegal. The rangers will give you a ticket and a fine if they catch you doing it. This is to keep people from hurting themselves.

I know that all these laws are well-intentioned and have merit if we want a society that regulates the details of our lives for our own good. But the glaring contradiction for me is that the greater harms are often left untouched.

We force a worker to wear a safety helmet on the job but do not force his employer to pay him a living wage for his work. Fast food workers are required to wear hair nets to protect our food, but their employers may pay them poverty-level wages. Predatory lenders are free to scam the poor, the elderly, and the uninformed. The banks may gamble with our savings instead of keeping them safe as a bank is supposed to do. And, of course, don’t even suggest regulating the sale of deadly weapons. And regulations to protect the environment are always under threat. Laws intended to protect the poor and minorities are deemed an infringement. Tax laws allow billionaires to pay half the tax rates of working people, to shelter wealth from taxes by investing it overseas, and for large corporations with teams of smart lawyers to avoid all taxes whatsoever.

Do you see my point? We regulate the smaller threats and leave the greater ones alone.