Our men’s locker room at the county swim and fitness center is the old-fashioned kind. It’s an open, communal space. Unlike the trendy commercial fitness centers there are no private dressing rooms or privacy screens. We see each other and hear each other. And the locker room sometimes takes on a social media aspect. The extraverts talk out loud, even to total strangers, as the introverts listen and analyze. It was that way this morning. 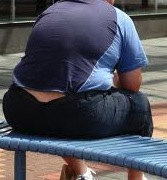 There was a man slumped down and panting on the bench in front of his locker. He was a large and overweight man with an alcoholic appearance. Even though he’d been sitting for some while, he was still breathing heavily. The locker room was quiet except for this loud breathing.

A nearby man spoke up then. “You must have had a tough workout, huh?” he said to the slumped man. “Not really,” the man said, “I feel so bad I don’t do that much. I have a lot of pain.”

“Well, every little bit helps. The main thing is that you’re staying active,” the other man said cheerfully. He was obviously trying to be positive about the situation. But his effort was in vain. Everyone in the locker room heard the next thing the slumping man said.

“I’m ready to just go to sleep and not wake up.”

The words hung heavy in the air and seemed to last on like an echo. There was a silence in the room that also seemed to go on for longer than it actually did. What are fellow humans supposed to feel or say when one of us speaks of wishing to die? What would it take for others of us to want to die in our sleep? Did the slumping man really mean this, or what? Should someone be notified?

Another man spoke up then. “Things can’t be that bad,” he said, “what kind of pain do you have?” The man on the bench said he had back pain and his knees hurt. It was easy to look at him and imagine that being the case. “Well, lots of people have those things,” he said. “Just think about those people on dialysis or who lie in a bed and get fed through a tube.”

And the first man put in that dying in your sleep is certainly a good way to go, but he wasn’t ready to schedule it any time soon. Then he laughed and said, “I think you’re just talking trash with us anyway.”

I wasn’t so sure.

My father and I had in common a pair of physical disabilities: his right hand and my right foot. Both were handicaps beyond our control, and both were a part of our self-consciousness around others. Although he was right-handed, Dad shook hands with others using his good left hand turned thumb downward. Around others, I instinctively hid my bad right foot behind my good left one. This created something of a bond between us.

Dad had mangled his right hand as a poor North Carolina mountain boy feeding sugar cane into a sorghum molasses mill. The mill took his index and middle fingers, and did damage to the rest of the hand as well. Despite this, Dad went on to college and played football, baseball, basketball, and track. The lack of fingers never kept him from writing or gardening or typing or fishing or anything else. But he was always conscious of it and spoke little about it.

Now and then, when they give us our feet, someone gets a defective one. My right foot was given me defective, being abnormally large and equipped with tiny useless toes. Doctors removed the toes and over the years whittled down the size as much as possible. The lack of toes never kept me from football, running, golf, hiking and mountain climbing, tennis, and swimming. But I am always conscious of the foot, especially around the curious.

One day I had finished swimming at a community pool and was showering in an open area in the men’s dressing room. In from the pool came a young boy, and I saw him see my foot. After an excited, wide-eyed look, he turned and ran back the way he’d come in. He returned with his little sister to show it to her. Then he went to the door and called for his mother to come in and see. The mother called them both back out and that was the last of it. Over the years I have had many wide-eyed children staring, and occasionally some adults.

When he was old, my father took me to the area where he had lived as a boy and lost his fingers. Out from Asheville is the town of Marshall, and out from Marshall was Brush Creek. Dad and his family lived in a cabin in a valley there, close beside the French Broad River. The valley was all grown up and void of homes or dwellings, but Dad took me where he said the cabin had been located, and where the cane mill had been. He explained that after the accident they took him across the mountain to a doctor, and the doctor removed what was left of the two fingers by lantern light. His older brother George kept the fingers in his pocket and the next day the boys buried them on hill behind the house. Dad told me he could show me the burial spot “within ten feet” and did, I can only assume.

Yes, I have been to VA hospitals and seen the war-injured. And, yes, I know that a bad hand and a bad foot are not to be compared with the wounds of those service men and women. And I know I could never fully appreciate the mental trials they endure. But I do have some idea about it.

When my mother died in 1970, my father purchased burial spaces in the Grandview Cemetery of Maryville, Tennessee. Maryville was our home town, and the location of Maryville College, where my father and mother had met as students, and where Dad returned to spend most of his life teaching.

Grandview Cemetery is well named. The “grand view” is its view of the Appalachian mountain range, locally bounded by the Great Smoky Mountains National Park. Out town has changed a lot over the years, but the grand view of the Smokies does not change. If you want your body buried in a cemetery, this is a good place.

The last time I was in Maryville, I visited Grandview and tried to find these graves. I thought I could do this, but much has been added to the cemetery in recent years, and I never wrote down any locations. I tried to find someone in the cemetery office who could help me, but found no one.

What I did find the other day, while looking for something else, was the original purchase document for these cemetery lots. Included was a map and location information. Dad had paid $1,142 for 6 spaces in Grandview. He had made a down payment of $342 and agreed to make two payments of $400 each over the next six months.

As I glanced over the remainder of this old document, one of the “purchaser agrees to the following” statements stood out. I was stunned. The following was a legal and binding condition of the cemetery lot purchase:

“He, She or They are of the White and/or Caucasian Race and will make no attempt to obtain internment and/or internment rights for any other than of that Race in or on said plot and/or in or on the cemetery.”

I know, of course, that I could break this agreement now and no harm would come to me. I know that likely by this time there have been non-white burials in Grandview Cemetery. I assume that new purchasers of grave sites in this cemetery no longer sign such a statement. So is this just a relic of the past? We are now a multicultural society, and prejudice and discrimination are behind us, right?

What of Arizona and the other states that today are passing laws allowing businesses to refuse their services to same-sex couples. Is discrimination based on sexual preference any better or worse than basing it on race? How much better is a law allowing a cemetery business to refuse burial sites to same-sex couples than one that does so based on skin color? And this is in 2014, not 1970.

Of course, the discrimination needs to be on “religious grounds” under terms of these laws. The business refusing the service must profess that gayness offends its religious beliefs. (This raises the question of how a business has a religious belief, and whose religious belief it needs to be, but no matter.) In passing these laws, the states say they are upholding the principle of religious liberty, which, they say, is under attack today. Thus do the victimizers portray themselves as the victims.

I can tell you from my personal experience growing up in Maryville that religion was the rationale behind segregated cemetery lots. It was the rational behind separate toilets and signs reading “Colored to the rear” on the White Star Line busses. Preachers preached about the Old Testament “curse of Ham” and used it to justify all types of discrimination against persons of color. They preached that god made black birds and blue birds and red birds, and that these do not inter-breed. They observed that god placed people of different races on different continents and obviously meant for them not to mix.

The days of that preaching is largely gone. But the idea that a business serving the public can discriminate against people based on religion is obviously not.