My interest in the American Bald Eagle began early. When I joined boy scout Troop 88 in Maryville, Tennessee with the rank of Tenderfoot, I knew that the ultimate was to become an Eagle Scout. This goal was held out before us over the years of advancing to higher ranks of scouting. I was not especially fond of studying and working on all those merit badges, but I did it because of the goal. Whenever I met an Eagle Scout in uniform I would glance at the imposing badge with the red, white, and blue ribbon and the silver eagle hanging below it. I wanted one of those and eventually did get one. 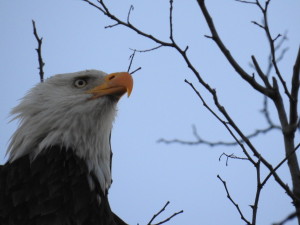 The Bald Eagle is, of course, our national bird and a symbol for others besides boy scouts. I am happy that Benjamin Franklin did not have his way about selecting the turkey as our national bird, even though I do like turkeys also. The Bald Eagle is just an amazing, strong, soaring, intelligent, skilled, majestic bird. I never tire of watching them, and when I can I enjoy trying to photograph them. 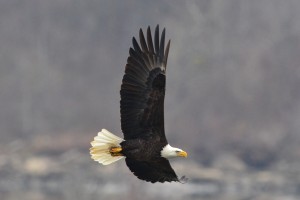 Most of my photographs have been from a considerable distance. I do have telephoto lenses, but those get you only so close. I am amused when people observe my long lenses and think that they can magically bring any distant object "up close." They can't. You still have to work hard, be patient, and be lucky to get close shots. I keep trying.

I was lucky the other day in the Blackwater National Wildlife Refuge near Cambridge, Maryland. From a distant road I saw two eagles apparently having a fight over something. It turns out there was food on the ground and they were fighting over it. By the time I got there one eagle had chased the other on off and was eating. There were already three photographer cars there I joined them. The eagle was intent on its meal and did not fly away. I shot from the roof of my car, first stills and then video. I got four short videos, each about a minute in length. The following is unedited and the sounds you hear in the background are camera shutters clicking as fast as they could. Enlarge to full screen for the best view . . ..