I would admit it, even if it wasn’t obvious.  I’m drawn to movies that try to fathom the meaning of life.  And this includes the corollary, which is the meaning of our death, if any exists.  Those who avoid these speculations in favor of the many diversions that surround us need not read on.  I assume you are not in that crowd or you wouldn’t have clicked on edbriggs.com.

Many film critics did not appreciate The Good Heart.  Roger Ebert rated it low and says “The actors cast themselves adrift on the sinking vessel of this story and go down with the ship.”  Variety magazine calls it “as corny as anything mainstream Hollywood has ever concocted.”  I had thought that my own tolerance for corniness was pretty low, but I guess that shows something about the eye of the beholder.  Anyway, be advised that you won’t be hopping on a bandwagon if you do join me in liking this film.  I happen to love Ishtar and watch it again about once a year.  Most people including the critics didn’t know how to take that film, and I think the same will be true of The Good Heart. 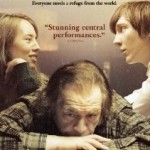 The Good Heart is about a bar owner facing the end of his life and finding meaning by befriending a young homeless man.  The young man is played by Paul Dano, the older brother from Little Miss Sunshine.  Jacques, the bar owner, is played by Brian Cox.  Both performances are superb.

Can people change, and how does it happen, if so?  Jacques is sour and insulting at the beginning of the film, even to his loyal customers.  I did once know a restaurant owner just like this.  He had the best barbecue in town, and his customers retold the stories of his insults.  Like the lady who asked what he had for dessert and he told her she looked like she didn’t need any.  Like the man who asked what kinds of barbecue he had and he said whatever he found killed on the side of the road that day.  His place had no sign and did no advertising.  Yet it was usually crowded and often had a line waiting.

The man I knew never changed, but Jacques did.  He mellowed.  But Paul Dano’s character went the other direction.  It was as if the two swapped roles.  And you find yourself asking if any of this matters.  Does it matter how we treat others?  Why is is good to be a good person or bad to be a bad one?

Despite its serious questions, the film includes a lot of humor.  Wait till you see the duck that lives in the bar, the hospital pranks, and the bloody mary scene.

I compare this film with Magnolia.  It is essentially a parable of life and you are not intended to take it literally.  It places its characters in extreme situations and has us imagine how they feel and experience how they react.  It is a meta-story, not a story to be taken literally.  Come to it with that understanding and you may find much to appreciate.

Watch the trailer from The Good Heart.