The office where I spend my days looks out across a restaurant parking lot to a major intersection in the Maryland suburbs of Washington D.C. The restaurant draws people who work in offices like mine, mostly well dressed and prosperous appearing. There are groups of men, groups of women, couples, arranged meetings, and a few singles. I am on the ground floor, so I have a good view of this activity. I also have a good view of the activity just beyond it where Nicholson Lane crosses Rockville Pike. All day long the cars and trucks travel there: slowing, waiting, signaling, turning, sometimes honking. There are usually lines of cars just sitting and waiting their turns. This is why the intersection draws homeless people seeking assistance in the form of cash. Quite often there are several of them, and quite often they are there for most of the day. I have watched them in the cold of winter, the heat of summer, and everything in between. 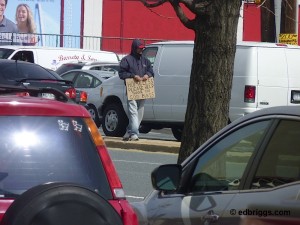 They stand on the long concrete lane dividers. As the cars line up, they walk slowly along holding their hand-lettered signs and sometimes a container for contributions. They watch for a window rolled down and an outstretched hand. Mostly the windows stay rolled up and people avoid eye contact. Sometimes they walk down the actual pavement between the rows of cars. There are men and women, old and young, many appearing crippled or otherwise impaired.

I see this all day long, every day, since my desk faces this window.  I have only to glance above my computer screen and there it is. Although I am used to this sight, it remains disturbing, an embarrassment.  I know that nationwide over 100,000 of these homeless are veterans of our wars in Vietnam, Iraq, and Afghanistan. Most are disabled in one way or another. In another day, or in another country, these would be helped, But no more in America. We say we can’t afford that. We can’t afford helping people who aren’t helping us.

Some of the people passing by think these homeless should get a job and work for a living like everyone else. America is the land of opportunity, after all. They should be ashamed of themselves, out there begging for handouts. They could take care of themselves like everyone else if only they were willing to work.

Some of the people passing by think that many of these are actually very well off. They read a story once that claimed a man who begged on the street during the day lived on his yacht in the evenings, or had a chauffeur, or owned a condo in Florida. Or maybe it was on the radio they heard about this.

Some of the people passing by are religious, but they look the other way and pass on by like everyone else. Their “social issues” do not include this social issue. The mayor and bank president are greeted warmly in their church, but these street people would not be. They would be an embarrassment.

Some of the people passing by give money now and then, and wish for a solution to this problem. But the problem seems overwhelming and far beyond the the means of one concerned individual. If you give money at one intersection, someone looking just as needy is waiting for you at the next.

As I follow these scenes every day, my feelings get mixed. I am thankful to have a good job, drive a nice car, work with pleasant people, and leave at the end of the day for a good wife and a good home. I do not know where the street people go, but I doubt that many will be sleeping on their own yachts. I sometimes wonder about them on dark, rainy nights or in the bitter cold of winter when some will freeze to death. I feel grateful and guilty both.

I could turn my desk around and face the wall, I suppose.