Guadalajara is the second largest city in Mexico, second only to Mexico City. It sits on a highland plateau at an altitude almost identical to that of Denver, making it Mexico’s “Mile High City.” As such, it is known for sunny days, cool nights, and a spring-like climate. You would think that a mile high city would be known for its clean, refreshing air. I used to think that about Denver until I learned differently. Like Denver, Guadalajara has an air pollution problem. 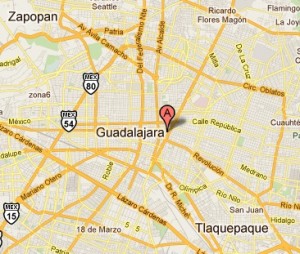 When I visited Guadalajara I was lucky to hire a private tour guide with his own car for a full day of looking around. I told him what I was interested in, and he took me there. He was a nice man who did accounting for the hotel and took people touring on the side. He took me places I would never have found or gone on my own, and I felt safe and comfortable being with him.

Sometime during this day, we found ourselves sitting in traffic behind a bus. When the light turned and the bus moved ahead, a cloud of thick, black, evil-smelling fumes surrounded us. My driver squirmed in his seat, made an exasperated sound, and then said to me, embarrased, that this should not be allowed in a modern city like Guadalajara. It was an awkward moment. He had just been describing the accomplishments of his city with some pride and satisfaction. And now this. I can’t recall what I said, but it was probably something to the effect that the U.S. has a lot of problems with air pollution also.

Indeed, our problems with air pollution could get even worse. Efforts are underway to scale back or eliminate laws that seek to keep our air and water clean. Those laws reduce corporate profit, almost like taxes, and they should be eliminated, many claim. Even the agencies that seek to protect our environment should be eliminated, they propose. The polluters will regulate themselves, it seems to be assumed. Yeah, right. As in Guadalajara.

The need for clean air to breathe and clean water to drink is basic to the human condition. And these are in a special category of life-sustaining resources. The choices others make about their diet do not control my choices. You can eat what you want, and I can eat what I want. But air and water are shared resources. When someone pollutes them it affects us all. It isn’t just the choice of the bus in front of me.

The condition of that bus affects the air I must breathe. It affects my health and well-being. It affects the futures of my children and grandchildren, and ultimately the future of our shared planet. How we would jeopardize those futures in the name of corporate greed is hard to imagine.

The planet we live on is a closed system where everything is not only shared, it is also finite. What happens to the air and water in one place affects all the other places too. It is always healthier and cheaper to keep from making a mess than to try cleaning it up afterward. The EPA has evidence that each dollar spent on pollution control results in a $30 savings in later health coasts. We can pay now or pay later, but the later costs will be be huge.

Also, if we ignore all warnings, there could be no later later.