When I was a young man and newly married, also being at the same time a poor college student, I did not want or need the burden of another child to raise. Our first had arrived just eleven months after the wedding. I did, however, want to have sex with my wife. The answer, of course, was contraception, and the most obvious solution was “rubbers,” as we called them then. 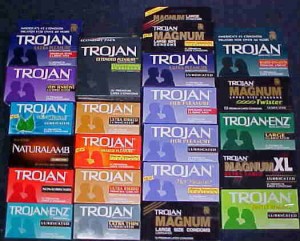 Buying rubbers was not as it is now. They were sold only in drug stores and only from under the counter, like something illegal. You had to ask the pharmacist for them. I hated this process and was embarrassed every time I made such a purchase. So I would buy as many as I could afford each time. But being a poor college student, that was often not a lot.

I entered the drug store and pretended to browse the aisles while scoping out the situation. I located the pharmacist and made sure he was a man. Then I monitored other customers and waited for an opportunity to approach him privately. The last thing I wanted was to be in the middle of this transaction and have a woman walk up and listen in. The sense of danger could hardly have been greater had I been planning to rob the local bank.

I saw my opportunity and approached the pharmacist. I quickly told him my business. My face was very serious as was his. He asked me how many I needed. I said three dozen. He looked me up and down, sizing me up. There was something of a twinkle in his eye. He reached down behind the counter and got the three boxes. He placed them embarrassingly on the counter in plain view, although that was actually the only place he could have placed them. Then he smiled broadly and said out loud: “Think this will last you to the end of the week?”  I was not amused then as I am now. My cheeks burned red and I did not answer the question.

This was around the time that Pope Paul VI issued his encyclical letter known as Humanae Vitae (Latin for “Human Life”), which reemphasized the Catholic Church teaching that it is always wrong to use contraception to prevent new human beings from coming into existence. Contraception is defined as “any action which, either in anticipation of the conjugal act , or in its accomplishment, or in the development of its natural consequences, proposes, whether as an end or as a means, to render procreation impossible.”  This includes sterilization, condoms and other barrier methods, spermicides, coitus interruptus, the Pill, and all other such methods. (Catholic Answers – www.catholic.com) This certainly applied to my purchse at the drug store counter.

Until recently, I had thought that debate over birth control was a curious and rather humerous relic of the past. Like my purchase of rubbers from under the counter. I probably knew that for Catholics the Humanae Vitae letter was “still on the books,” but I also knew that practicing Catholics paid no attention to it. Some 98% of Catholic women have used sterilization, condoms or other barrier methods, spermicides, coitus interruptus, the Pill, or other such methods. One would certainly assume the same for Evangelical Christians and other members of conservative religious groups. Why then this outcry against planning parenthood? Why then these efforts to enforce bans on contraception through State and Federal laws? Is it not pathetic that religious leaders who cannot get their members to observe such a ban through teaching and instruction should try to get it enforced through government legislation?

Up in nearby Pennsylvania there are sincere Amish people who believe it is wrong to own and drive automobiles. They get around in horse-drawn carriages instead. We grant them this right, although it does pose some traffic and parking problems now and then. But the Amish are not trying to get legislation passed to ban automobiles for the rest of us.

You could argue, however, that if their religion was large enough and strong enough and political enough, they might be doing just that. The English Puritans who became American Pilgrims had suffered under religious persecution in their homeland. But when they came to the New World and found themselves in the majority, they turned around and practiced religious intolerance themselves. From this did Roger Williams flee to found Rhode Island as a colony based on religious toleration, separation of church and state, and political democracy. It became a refuge people seeking liberty from religious persecution.

The temptation of all religion has been to ally itself with the State and use the power of the State to enforce its beliefs and support its institutions. That works well for religious majorities but not for religious minorities or for those who choose to opt out of religion altogether. Because of this, America was founded on a separation of Church and State.

If Churches wish to refrain from cars or condoms, let them do it. But don’t let them use the power of Government to impose it on the rest of us.