The overall event was complex, highly organized, and well staffed with volunteers. It included youth and adult triathlons, 2 and 3 mile swims, a barbeque lunch, electronic event timing, directed parking, and an awards ceremony at the conclusion. The weather was favorable and the water temperature of 68 degrees was somewhat above average for the time of year. This was my first open water swimming event of 2012. Although I swim morning laps regularly throughout the year, I began serious training for open water events back in December. Most weeks I have put in10 miles, including one 3 mile swim.

I am planning to do a lot of open water swim events in 2012. In the past I have twice completed the Great Chesapeake Bay Swim (4.4 miles), twice completed Swim for Life in Maryland's Chester River (2 miles), and once completed the swim from Alcatraz Island to San Francisco (1.25 miles but featuring cold water and tough currents). Have done several other 1-2 mile swims in lakes and the ocean. My main asset is endurance, not speed. I do like to better my own records and sometimes beat a few swimmers of my own age in the process.

Before I tell about my 3 miles in the Nanticoke River, I will share a feeling I experienced at this event. The feeling was one of wholesomeness. Hundreds of people had come to this beautiful spot. There were mothers and dads, kids of all ages, parents and grandparents, fit athletes and many not so fit. People were happy and friendly, making new acquaintances, cheering each other on. And it was such a contrast to the negativity of the news we read and watch every day. News that hardens us and discourages us and makes us feel bad about the human race. But here you could feel good about something.

I could have stood around and just enjoyed it all, but I did have 3 miles to swim in that river. As you can see, the course was triangular. We swam upstream along the shoreline to the first yellow marker, then out in the river to a second marker, then back toward shore to where we had started. We swam this twice, so the swim was divided into 6 legs.

The Nanticoke River Swim is held just upstream from where the river empties into the Chesapeake Bay, and the river is quite wide at this point. It is also very influenced by the tides that move up and down the bay. The words upstream and downstream take on different meanings here. Rivers are supposed to flow downstream, but here that is variable. Our swim began at low tide. Whatever current there was moved downstream toward the bay. But soon after we started the tide began to turn and upstream became downstream. By the time I finished leg 5 and rounded the marker to head for home, the water was moving swiftly upstream, from my right to my left. I was swimming toward the marker near the finish line, but the tide was carrying me up the river. And when I finally realized my mistake, I had to turn and swim against the strong current for a long time just to get back to where I needed to have been in the first place. 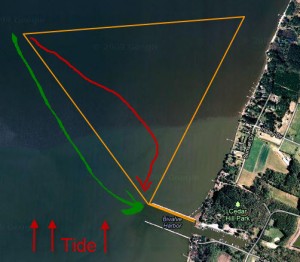 The swimmers who did this correctly swam deliberately much to the right of the target and let the current move them back on course as they neared the finish. I have shown their course with the blue line, and the route of my swim with the red line. This mistake cost me about 18 minutes.  I finished the swim in an hour and 48 minutes (a pace of 36 minutes per mile). I would like to return to this event a year from now and hope to get it right. Although some veterans of the swim I talked with tell me that the swim is different every year because of these changeable conditions.

The winning swimmer was an 18-year-old who has won now for 3 straight years. His time was 11 seconds over one hour (a 20 minute per mile pace). I stand in awe.

Many of the swimmers I talked with are entered in the Great Chesapeake Bay Swim on June 10th, as I am. We all said "we'll see you there," although that may be difficult since the bay swim will have 640 of us, not 69.