The annual Centennial Lake Swim was held on Sunday, May 13, and 2012 was my first time to participate. It was a calm, cool day and ideal for swimming in a lake. Centennial is not a large lake and this one-mile swim pretty much goes around the lake perimeter, covering most of the lake during the swim. The event was sponsored by the Central Maryland YMCA Masters Swim Team and was well staffed and organized. (http://http://www.cmym.us/) 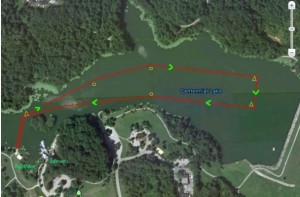 There were "only" about 150 swimmers, which was ideal for this smaller size lake. Also the event organizers arranged for staggered starts with faster swimmers placed earlier and all of us arranged in waves of 3 swimmers at a time, starting each new wave every 15 seconds. This greatly diminished the crowding and collisions of mass-start swims. For example, the Chesapeake Bay Swim (June 19) will feature 2 waves of 300 swimmers packed together and starting at the same time. Not for the faint of heart.  I wish that all open water swim starts could follow the Centennial Lake swim example.

We were allowed to get in the water and swim before the race start. I have decided that this is almost always a smart thing to do. You get used to the water temperature, whatever it is, swim some strokes and make sure the goggles don't leak. It also helps to relieve some of the anxiety that can come on you when plunging into strange water with a crowd of other swimmers. 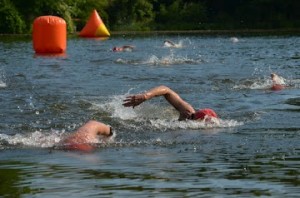 Another nice thing about this swim was that all of the navigation buoys were on your right. Like many or most right-handed swimmers, I naturally breath on the right. This made sighting the markers and making the turns very easy. The Nanticoke River swim I had done the week before was just the opposite: buoys on the left. Of course the ideal preparation is to learn to breath to either side. I have tried this and can do it awkwardly, but not efficiently

At my present level of swimming, I did about as well as I could expect to do in this swim. I completed the mile in 30 minutes and 41 seconds.  I finished in 33rd place out of 101 swimmers in the wetsuit division. The winning time was 20 minutes and 55 seconds.