I've been watching cormorants lately. They are fascinating birds. They gather in great numbers below the Conowingo Hydroelectric Dam on the Susquehana River in Maryland near the northern end of the Chesapeake Bay. 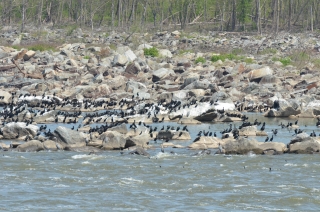 Did I say "in great numbers?" Just survey a portion of the gathering (click to enlarge). The cormorants are the black birds and the most numerous. Harder to see are the ones fishing in the rushing water. Unlike ducks, the feathers or cormorants are not buoyant, so they sink down in the water instead of riding up on top of it. The reason their feathers don't float is so they can dive down for food, which most ducks can't do. Cormorants can dive down very deep after food, although fishing is so good below Conowingo that they likely get plenty to eat not far beneath the surface. 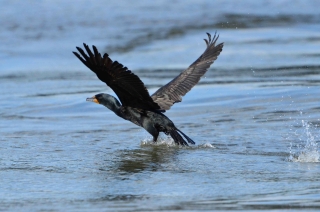 Since the feathers of cormorants get wet and heavy, the birds have a struggle to get airborne during a water takeoff. Their wings have to work really hard and also their webbed feet need to help out as well. It takes a good distance and creates a lot of fuss. A feeding cormorant may have to perform these takeoffs numerous times before catching a fish. They fly up close to the dam and land, then float downsteam watching for their next meal. If they don't find it by a certain point downstream, they takeoff and land upstream again. 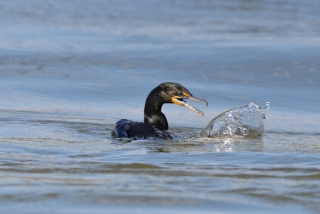 There are 40 some varieties of cormorants. These are the most common in our area — the double-crested cormorant, so named because the male sports a second crest during the mating season. As shown here, the birds have a fearsome weapon for snagging fish. Not only are their beaks long and needle sharp, the top part has a wicked hook in the shape of, well, a fish hook. Imagine being a fish and having that thing come toward you at lightening speed. And this only moments after you got churned through the massive turbines of Conowingo dam.

When a cormorant dives down and gets a small fish, it will swallow it under water. But when it catches a large fish, it must bring it to the surface and perform an amazing maneuver. It has to release the fish from its beak, flip it so the head is pointing down and the tail pointing up, and catch it just right for swallowing. As my picture shows, they can swallow very large fish, and all without the aid of any hands, fingers, claws, or feet. Because this flipping and swallowing operation has to be so precise, it is also an opportunity for a fish not inclined to be swallowed to wiggle and get away.

A further aspect of cormorant activity at Conowingo is the turbulence and speed of the river. The best fishing is when the turbines are running and the river swolen and rushing. In the short video that follows, you will see them seeking and catching their food in water no human swimmer would attempt. You will see many of them sunning and watching from dry rocks while others churn past them. We assume that most of the watchers have already had success and are settled to dry off and digest their meals. This video represents a 55-second slice to time on the river. I have counted in it 17 bald eagles, 7 great blue herons, and at least 4 of the comorants visibly catching fish.

2 Responses to “That’s A Lot to Swallow”