The Bay Swim is just a week away now. I am in the tapering stage of preparation.  Last week I swam 6 miles instead of the usual 8.  This week I will do several short swims just to stay in rhythm and keep the feel of the water and my wetsuit. The Bay Swim starts two hours earlier this year. We get away at 8am instead of 10. I like the earlier start, as the winds tend to be calmer then. My main hope for the day is calm winds and waves. If there has to be wind, let it be from the west and not in our faces from the east.

I have tried a different training routine this year.  I started intensive training just 4 months ago instead of 6, and I have been putting in 8 mile weeks instead of 10. But I have also been doing more hard sprints and longer distance swims.  Most weeks I only swam 3 times, but I did many 3-mile swims and lots of intervals.  A month ago I began doing 4-mile swims, usually 2 per week.  I have been working harder on speed and having some success. Hopefully I am ready. 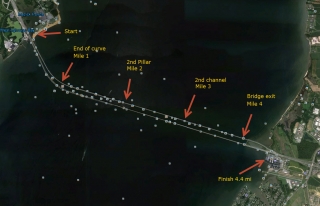 Mental preparation is also important, I think. Since we mainly swim between the spans of the Chesapeake Bay Bridge, I have continued to study the bridge and memorize it. I screen captured it from overhead using Google Earth, and marked the 4.4 miles in sections relative to the bridge. I think it helps to divide the swim into sections and to be able to follow my progress and anticipate the distances remaining. (click on the image to enlarge)

The first mile goes from the beach out and under the north span and down to the big curve where the bridges are straight for the rest of the way. The second mile goes across the main shipping channel to the second huge pillar that holds up the highest point of the roadways above. The third mile takes us to the second and lower shipping channel. There begins the fourth mile where we swim along the seemingly endless smaller pillars and watch the cars getting lower and lower overhead. Near the eastern shore we exit on the south side and swim the last tenths of a mile to the finish. 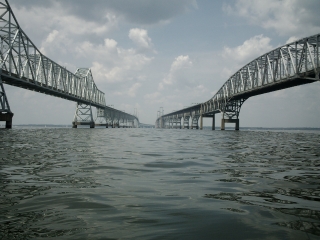 This is the swimmer's view from about mile 3 and looking back to where we came from. You can see the big curve where mile 2 begins in the far distance, and closer on the two huge masonry pillars on the right side. I doubt that I will stop and turn around to take this view, but the views you get all along the way are pretty awesome, as I hope the picture shows.

Reading on the subject of "tapering" in preparation for endurance events is interesting. There is general agreement that tapering is beneficial, but the specific formulas vary greatly. I am being more aggressive about tapering this year. Aggressive meaning I am taking fewer days off during the final week and pushing harder when I do swim.  I am swimming quarter miles (only, despite the temptation to do more) but pushing for speed.  Also I am swimming in my wetsuit in an outdoor 50 meter pool. I expect to do these swims Monday through Friday. After this I will focus on resting and hydrating and trust the process.

Expect a full report on the 2013 swim in about a week.