When I was a high school student in Maryville, Tennessee, I knew three things about the name "Gregory." I knew that my girlfriend/later wife's relatives were named Gregory and were buried in Cades Cove in the Primitive Baptist Church cemetery. I knew that Gregory's Bald was named for them. I had climbed it and camped there numerous times. And I knew that somewhere in Cades Cove there was a cave by the name of Gregory. So one weekend Charlie and David and I set out to find this cave. 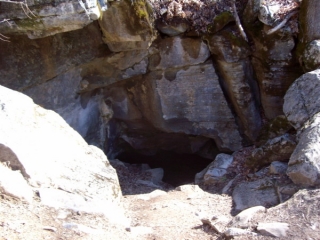 I don't recall just how we learned about the area we searched, but I well recall our discovery of the cave entrance. It was inconspicuous and grown up, down underneath a ridge near a barn and an abandoned house. This was in the 1950's in the Great Smoky Mountains National Park. The cave was unmarked and unsecured. We found there was hay in the nearby barn, and that seemed an ideal place to unroll our sleeping bags and spend the night.

Over the weekend we explored every foot of Gregory's Cave. The cave was largely one long channel with a series of connected rooms and a few short offshoots. Despite our looking we found no weapons, skeletons, gold coins, or other items of interest.  The cave was mostly empty except for some wood lying around.

On one of our trips into the cave, we decided to gather up wood and make a fire. The wood was dry, of course, and the fire was started easily. We settled down around the fire and were taking it easy. But after awhile, we began to notice something peculiar. The ceiling of the cave had disappeared. The ceiling was now like the sky on a cloudy day. Then we noticed that the ceiling was getting lower and lower. Our smoke had been rising up and the ceiling was lowering down.

There was no water to put out the fire. We soon became alarmed and decided we must beat it. By the time we reached the entrance to the cave we were almost crawling to keep our heads beneath the smoke. But we did escape.

According to an article in smokies.com the cave was actually a commercial operation of the Gregory family in the 1920's with a charge of 50 cents for tours. And during the cold war it was stocked with food and equipped as a fallout shelter. Also, it is said that the Missionary Baptist Church once held services in the main room of the cave.

The national park has never chosen to make an attraction of the cave, or to advertise its location. I believe it is now boarded up and inaccessible.