Numerous U.S. State legislatures have passed or are considering what are termed "Religious Freedom Bills." These exempt the owner of a business from liability for refusing to do business in cases where the owner has a religious objection. When asked what problem these bills seek to address, the example often given is that of a Christian cake baker who is requested to bake a wedding cake for a same-sex couple. 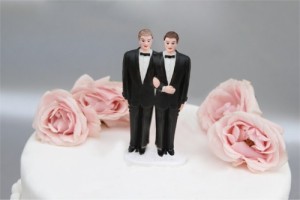 It is assumed that the cake baker will gladly bake a cake for John and Mary, but objects to the wedding of John and Jim, or of Mary and Sally. The cake baker considers these relationships immoral and does not wish to be associated with them. Providing cake-baking services might be construed as giving approval to a sinful act. Apparently, in this person's church, you do not want to become known as a friend of sinners.

"Friend of sinners" . . . I remember that phrase from somewhere. Actually it was a term used against Jesus by his self-righteous critics (Matthew 11:19 and Luke 7:34). Jesus was known to associate with the most despised people of his day: prostitutes, tax collectors, lepers, adulterers, Samaritans, thieves, Roman occupiers, and street beggars. Jesus was also known to suggest that these friends of his had higher moral standing than his self-righteous critics. Which brings us back to the sinner-avoiding Christian cake baker.

Really? If you are in the cake baking business, you want to pick and choose your customers? You want to focus your moral judgment on each person who comes to the counter and consider if you should be associated with him or her? Maybe you don't want to serve Muslims or Buddhists or Jehovah's Witnesses? You don't want anything to do with sex offenders or former prison inmates? What about "sinful" (your judgment) women who have had abortions? Why not screen for use of contraceptives or foul language or immodest dress habits? When you aim to create a legal protection for moral judgments, the list goes on and on.

In the days of start-up Christianity, believers would not have turned to the State to enforce their morality. They would have baked their cake, or not, and accepted the consequences. Only now, in America, where professed Christians are 85% of the population, do they seek support of the State, affirming that they are, indeed, the State religion and deserving of special treatment. This is historically interesting in that a formally despised religious minority is now exercising its muscle as the religious majority. The persecuted have evolved to become the wielders of power, despite their roots.

I have a dear gay friend who recently married his same-sex partner of many years. As a confirmed heterosexual, I admit that to some confusion of feelings about homosexuality. I was not born to that lifestyle. But I acknowledge that my friend was, and I wish him well with his partner. I feel this is a Christ-like position to take on the matter. I also do not consider my heterosexuality to be morally superior to his. Apparently god creates some of us one way and some the other. I accept this.

That Christian heterosexuals will turn to government legislation to enforce their moral judgments on others is troubling to me.

Why not just bake the damn cake for whoever needs one?

One Response to “The Plight of the Christian Cakebaker”