Don’t ask for a new hip unless you really need one.  Part Four in a series.

I was in two hospitals with my hip replacement.  The first was where I had the surgery and stayed for several days.  The other was a rehabilitation hospital and I was there for several days as well.  Although physical and occupational therapy were begun almost immediately at the surgical hospital, these were a focus at the rehabilitation hospital. 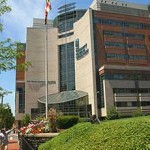 As I had not spent a night in a hospital in about 30 years, doing so again was an interesting experience, especially given all of the current and onging focus on the American health care system.  Also I have a good friend who recently worked for AHRQ – the government agency for healthcare quality and research (http://www.ahrq.gov).  I went to the hospital with the assumption that these are dangerous places to be, and the wise patient is on her guard.

I has both kinds of those experiences.  My rooms had nicely designed whiteboards facing the bed where schedules and reminders were kept, along with the names each day and each shift of all the people whose responsibility I was.  It was a great idea and a great thing when it worked.  The trouble was that many staff did not trouble themselves to use it, and the information in some categories was days behind.  There were shifts when I never knew or met the nurse that was assigned to me.  Continuity was spotty.

There was a great variation in caregivers following or not following procedure.  There were some who never gave medication or drew blood without asking my name and birth date and checking my identifying wrist band.  There were others who asked nothing and checked nothing, even when drawing my blood.  There were times when I rang for pain medication and had it almost instantly, but three times it took over an hour and many reminders and complaints.

On the positive side I also experienced some very competent, responsive, and caring individuals.  Also on the positive side is the obvious fact that I survived the experience and emerged to continue my recovery.  The point I am making is that the patient must be an active and informed participant in this process and not a passive recipient.

My surgeon is a self-described “conservative New Englander” who uses the anterior approach to hip replacement.  I entered the hospital on Tuesday, had the operation late that day, was transferred to a rehabilitation hospital on Friday, and came home on Tuesday.  I continued with in-home nursing and physical therapy care for 2 more weeks.  Your results may vary.  I see surgeons on the Internet promising much shorter hospital stays and recovery times than mine.  Good luck with that.  As far as I’m concerned, I needed the time I took.

This is not to say that coming home from the hospital was done with any reluctance.  To finally have your own bed, your own pillow, your own food, your own pictures on the wall–everything.  It was a huge lift and milestone.  But a long road to full recovery lay ahead.