Anyone who loves war and hates anti-war movies should avoid Joyeux Noel.  Although it is not anti-war overtly, but it undermines the “us good people against them bad people” premise of wars.  It tells the story of events that occurred in 1914 as German and Allied troups faced each other across their trenches on Christmas Eve and Christmas Day.  These are sometimes called “The Christmas Truce of 1914.” 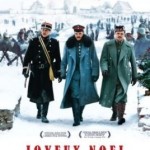 One side or the other began singing Christmas carols.  The other side listened, wondering, then began to sing as well.  Soldiers sang like the children they used to be.  Some were moved to tears.  Then they came out of their trenches and met in no-man’s-land among the bodies of the dead  They exchanged candies and cigarettes and worked together to bury their dead.

The fact is that such activity was strictly forbidden by both armies.  It is called “fraternization with the enemy” and it can be punished as treason.  Once begun, the urge toward peace escalated and got totally out of hand from the military perspective.  At the end of the day, having seen the human faces of their enemies, neither side wanted to go back to killing the other.

The role of religion in this story is especially thought provoking.  Both armies shared the same Judeo-Christian heritage.  Many on both sides were of the same Catholic persuasion.  War had divided them but underneath it their faith united them.  This was despite the fact that priests were divided as to God’s position with regard to the killing.  Clerics on both sides urged soldiers to kill the enemy for the glory of God who was certainly on their side.  It seems to be true that no matter how governments train young men to become inhuman killers, the risk of their apostasy remains.  Allegiance to a god of war can turn instead to a god of peace, especially on Christmas eve.

If you do watch this film, be sure to watch the special features and interview with writer/director Christian Carion (of the excellent The Girl from Paris).  It appears that he did a considerable amount of historical research and attempted to be faithful to documented events.