To frame my thoughts about A Song for Martin, I painfully recall taking my 90-year-old college professor father to buy a pair of pants.  Dad did not believe he needed the pants, but he went along at my insistence.  He took the selection into the dressing room.  I stood at the door, waiting.  Dad emerged with pants in hand and took me to be a salesman.  He began to inform me that the store should be ashamed to charge so much for pants like these, and he was not about to buy them.  I remember his confusion, something like fright, when I said that I was his son, Edward, and not a salesman.  The pain and embarrassment of that moment was shared by us both. 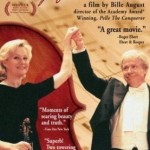 Martin (Sven Wollter) and Barbara (Viveka Seldahl) meet as he guest-conducts the orchestra where she is the lead violinist.  They fall madly in love, although both are unhappily married.  In a short time they are divorced respectively and beginning a life that celebrates their passion for each other and their shared passion for music.  Barbara becomes an active participant in Martin’s composing.  She is proud of him and he of her–both with good reason.  Perhaps a third of the film is devoted to this euphoric life.  Is it too good to be true?  Too good to last?

It must be difficult for an actor to suggest the subtle beginnings of this disease.  Hints, but only that.  Something wrong, or?  No, just a little stress and fatigue, perhaps.  And it must be difficult for Viveka’s character to portray all the shades of concern and denial, the back and forth between patient understanding and frustrated anger, and the dilemma of wanting to “do something” but finding no reasonable choices available.  To watch the film with suspended disbelief is to participate in a nightmare ride of emotions.

This is heightened by the very public persona of Martin.  He is the splendid hero of adoring audiences.  And when the signs of his disease begin to appear as embarrassing public lapses, you hold your breath and fear what may happen next.  The scene where Martin uninates in a flower pot in a public restaurant is heart rending.  You know it will get worse, not better.  But Barbara holds on to her hope, then despairs, then hopes again. Until finally the charming man she had loved is gone.  He no longer knows her.  Her sense of loss and grief is unrelieved.

In a perfect world, this would not happen, but it does every day.  This story is beautifully portrayed, heartrendingly and unflinchingly.

It may sound as if this movie is nothing but a “downer” after the initial love story.  It is hard to explain why that isn’t so.  Although you are watching two brilliant people in the days of their terrible darkness, you still observe a stubborness of the human spirit.  It models the strength to meet the worst that life can throw at us.  None of us will come away wishing to be in either of these places, but we will admire the struggle and wish that we might have the same fortitude.

The acting in this film is superb.  Martin and Barbara’s characters are completely believable.  The early Martin is brilliant, commanding, and charming, much in contrast to his lapse into the disease.  His wife and his adoring audiences–including us–find it incredible that such a person could ever decline as he did.  But in reality we have only to consider the similar journeys of Ronald Reagan, Charlton Heston, Barry Goldwater, and Winston Churchill–to name a few.

Sven and Viveka were married to each other in real life, and she, not he, died shortly after A Song for Martin was completed.