Leaving Barstow is about people feeling and being trapped in their life situations but still trying to rise above them.  Mostly it is about 18-year old Andrew, played by Kevin Sheridan who also wrote the the screenplay.  Andrew is smart and promising but seems tied to his mother’s problems and doomed to live the life of an underachiever in Barstow, California.  His teacher is trying to change that but literally dies while trying. 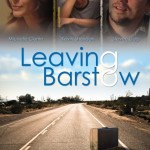 Andrew is shy, a virgin, and mostly a loner except for his best friend, Carlos.  Andrew’s mother, a widow, likes younger men and brings them home for the night on a regular basis.  Andrew’s night time refuge is to turn up the radio and listen to a late night radio talk show.  His glimmer of hope is an unanticipated romance, his first, with a local waitress from the restaurant where his mother also works.  Andrew’s final dilemma is that he cannot stay in Barstow with his mother and first love and still fulfill the dreams his teacher inspired.

The moving speech in which his teacher/mentor described in great detail his risk of settling for a life of mediocrity in Barstow must have weighed heavily upon Andrew.  To the end you keep wondering if he will or if he won’t leave Barstow.

As storytelling, this film is both moving and insightful.  The acting is believable and quite adequate to carry the quite ingenious plot.  Although the ending is a little sudden and forced (a common fault), it is easily forgiven.  Leaving Barstow is well worth the 89 minute investment.

Watch the trailer for Leaving Barstow.