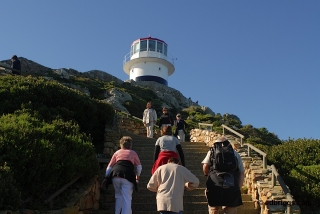 The Cape of Good Hope is an easy day trip from Cape Town and the one and only route down along False Bay is interesting as well. This area is famous for Great White Sharks and I observed parties who were going out to mix and mingle.  Also along this coast near Simons Town is Boulders Beach and its colony of African Penguins.  Be sure to see my lucky shot of a “performing penguin” and the shadows of fellow watchers and photographers looking down on it.  Also notice on the shot of the baboon who was sitting on the roof of someone’s car the “deposit” he was leaving on the trunk lid.  The baboons are so numerous around the Cape of Good Hope parking lot that there are uniformed attendants roaming with sticks to keep order.  The animals are aggressive toward people with food to be had.  I saw one chase a woman and her ice cream cone across the lot.  The cone and the woman were soon parted, and the baboon headed off with its prize.