It is not entirely clear that human beings were intended to swim in water. Compared to fish and birds and other swimming animals, we are slow and very limited. Still we, and I, keep trying. Doctors tell us it's great exercise. As a former runner, I know it beats pounding the pavement with my feet, ankles, knees, and hips.

The earth is covered with a lot of unfrozen water where swimming can take place. There are oceans, bays, rivers, and lakes abundant. But for most of us, swimming takes place in artificial man-made pools filled with clean, filtered water and with life guards watching. There are well marked swim lanes of measured distances and timing clocks to consult. There is a uniformity, a sameness, about swimming in these places, whether indoors or outdoors. I know that in a pool with 25 meter lanes, I need to do 64 lengths, 32 laps, to make a mile. There is no risk of getting lost or off course. Just follow the black line on the bottom of the pool.

As before, the Nanticoke swim begins at a small beach near the marina and starts out along a sea wall to the river. The course is triangular and you swim counter clockwise, staying to the outside of each marker buoy at the corners. We came expecting a three mile swim, which requires swimming around the triangle twice. But when the Coast Guard arrived, they announced that small craft warnings had been posted because of rough conditions which would make swimming difficult if not dangerous. A settlement was negotiated with race officials to allow the swim to go on, but shortened to two miles. Two miles meant swimming out and around the triangle once, and then back to the finish. It also defined a course with five legs which I have numbered on the graphic. 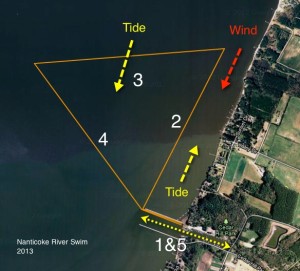 The first leg was in water mostly protected from the winds and river current. The challenges included starting out with the mass of swimmers in a small space and trying to get use to the unusually cold water, about 61 degrees. The cold water made it hard to breath, and I kept running into other swimmers or having them run into me. I arrived at the first buoy to begin the second leg still struggling.

The second leg was by far the hardest. There was some tidal current in our favor but a terrific wind and breaking waves in our face. Normally in open water you want to swim with your head down as you would in the pool, raising up to check your position about every 6-8 strokes. When I tried to swim like this there were two problems: I was still not getting enough breath, and often times when I tried to breath I got hit in the face by a wave and swallowed salt water instead of breathing air. This put me even further in breathing deficit.  I ended up swimming most of the second leg doing a survival breast stroke and holding my head up to try and anticipate the large waves coming toward me. I knew I was moving slowly but it was the best I could do. I looked forward to the turn into leg three where we would at least be swimming cross-wind and somewhat down wind as well.

I have experienced the effects of wind as both a runner, a swimmer, and a bicyclist. The effects are significant in each of these sports.  One might assume that the wind is more of a factor in biking or running, since you are upright and more exposed to it. One might assume that a swimmer, whose body is mainly beneath the water, would be largely unaffected. This is not the case, and the game changer is the force of moving water. In open water swimming, the wind moves the water and you must deal with that force. If the waves are coming directly toward you and breaking in white caps, water hits you head on and tries to drive you backward. On the other hand, if you are lucky enough to have the wind at your back, and you time your strokes just right, you can actually get a "ride" off of the breaking waves, somewhat like body surfing. If waves are coming from the right and you breath on that side as most of us do, you are facing the waves as you search for a quick breath.  There is much to consider and adjust to in terms of the wind.

I finally made the turn and sighted toward the next buoy far out in the river. Indeed, I was now able to swim normally. But the river had another surprise in store. When I got my next sighting of the buoy it was far to my right.  I was heading straight down the river, parallel to the shore. I corrected and swam more. The next time I sighted the same thing had happened.  I corrected even more and swam harder. What I and other swimmers did not know was that the tidal current was flowing downstream and not upstream in this area. Some later called it a whirlpool. I know I was carried far off a straight course on this leg, but finally I rounded the marker, wondering what lay in store as we headed cross-river toward the finish.

It was not as bad as I feared. I feared that this unpredictable tide would be pushing me off course. But I was able to take a bearing that helped greatly. I sighted a line from an anchored sailboat to some distant houses beyond it.  The sailboat was very close to where I needed to go.  I knew if I stayed on the course of this alignment, I would be heading straight.  This worked out well, and I was able to finish the course rather strongly, probably at about a 30 minute per mile pace. However, my total time for the two miles was an hour and 21 minutes.

I would have hoped to complete this course in an hour or less. Even under these conditions, some younger and stronger swimmers completed in 45 minutes. I was grudgingly happy to have completed it at all. The next day I found myself replaying the course and the conditions and wishing I could do it over and do it better.