The 2013 Great Chesapeake Bay Swim was held for the 22nd consecutive time yesterday, despite threatening weather and weather-related complications. Because of recent storms and flood runoff, the county health department had issued a water quality advisory which apparently caused registered 34 swimmers to stay home.  616 of us were not deterred, and 572 completed the swim. Due mainly to the strong  currents, 44 of the starting swimmers were not able to finish the 4.4 miles. These get picked up by the attending power boats and transported to the finish. Despite the qualifications needed to get into the event, there are always a few swimmers who start out and then pull out, but 44 was an unusually large number. My finishing time of 3 hours and 4 minutes was disappointing, although it was enough to win my age group.  It was 24 minutes slower than my time last year, which I would not have guessed because the swim felt strong and fast to me.

I’ve thought a lot about the 44 swimmers who did not complete the swim. There are no casual entries in the bay swim. Each of these people made a decision to enter back in December. They were picked from a lottery with 1200 entries. In January they were notified that they were eligible for the swim and they paid a $250 entry fee which was non-refundable after April 15. We can assume that for the prior months they had trained hard to be ready for this event, putting in countless miles and pushing to increase their speed and endurance. And we can assume that no swimmer stands on the Sandy Point beach waiting for the starting gun but planning to just swim out for part of the distance and then signal to be picked up and have a boat ride to the far shore. No, every swimmer fiercely intends to complete the 4.4 miles, and on this day a large number were unable to make it.

The main challenge I personally encountered was the wind blowing from the south. I am one of those freestyle swimmers who breathe on the right side after every stroke. In the past I have tried to learn bilateral breathing, but have never succeeded. In yesterday’s swim there were waves coming toward my face every time I tried to get a breath. Often I got a mouthful of water instead of a breath. I began needing to roll further toward my left side and point my face more upward in order to breath reliably.  This took extra effort and modifying my stroke. I assume this and the currents accounted for my slower overall time.

In Tennessee where I was raised, we had an expression for something that produced a mixture of pleasure and pain. We said that it “hurt good.” Even after sleeping nearly 12 hours last night, every bone and muscle seemed to complain loudly this morning. I groaned every time I moved. And yet it was satisfying because it represented a good effort. It hurt good. 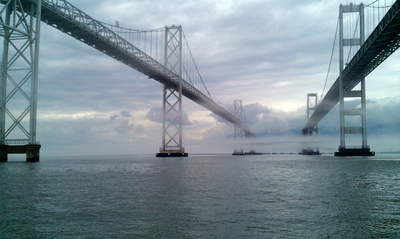 This was my 4th Chesapeake Bay Swim. Although familiar, it is still an extraordinary event. I would even say inspiring. Some 700 volunteers run the event to perfection. On the water there are 25 Coast Guard vessels, another 55 private power boats, and some 50 kayaks all keeping watch and standing by to help if needed. We swimmers get an awesome view of the majestic bay bridge overhead. The welcoming crowd on the far shore lifts you up. Everyone is so friendly and supportive.

After I was called up for my age group award, a young man congratulated me and told me he was much more impressed with the accomplishment of the older swimmers than with those his own age.

I am definitely an older swimmer, aged 76 the day of the swim.

Why would someone my age want to swim across the Chesapeake Bay?  Hey, some people my age are settled retirement centers, sitting around and taking life easy, watching daytime TV and playing cards.

I had a dear professor friend named Clyde Francisco. Clyde loved to play golf. One day we were playing with friends on a course that was part of a gated retirement community. We were walking down the fairway when chimes started playing, of all things, “Nearer my God to Thee.” Clyde looked at me and I looked at him. There was a sarcastic twinkle in his eye and a little smile playing around his lips. And he said to me, seriously, “You know, Ed, this life may be good for some people, but not for me. I want to be out doing things in the real world and not cooped up with a bunch of old people just passing the time.”

There’s another Tennessee saying for this. “I’d rather burn out than rust out.”