Today was my fourth completion of 4.4 mile Great Chesapeake Bay Swim. I’ve described this event is previous articles and won’t repeat the details here, except to say that it continues to be, for me, a thrilling and satisfying thing to do.

Other people do not always understand this. 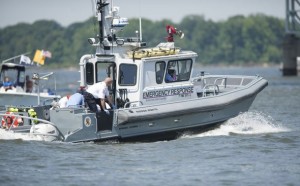 I came out of the water near a woman who told me that she thought she may have saved someone’s life during the swim. A man near her was suddenly in distress and she motioned for help and assisted in getting him into the boat. This event has something like 80 boats standing by to assist if needed, so help is never far away from anyone. Sadly, we later learned that the swimmer’s distress was due to a heart attack and despite the emergency responders’ efforts he was dead on arrival at the hospital.

His name was Robert Matysek and he was 58 years old. A native of nearby Baltimore, he came from his home in South Carolina to attempt this swim for the 20th time. Several of his family members were also swimming. His family testified that “This weekend was always like Christmas, Fourth of July, and his birthday all rolled into one. He passed doing one of the things he truly loved.”

I was reminded of my East Tennessee hometown days. One of our local physicians loved the hike to Mt. LeConte in the nearby Great Smoky Mountains National Park. He had a ritual of making this hike on New Year’s Day with friends and family members. He had done is for years, when one year he had a heart attack and died on the trail. “He passed doing one of the things he truly loved.”

A high school classmate of mine started and owned a large and successful business. But his passion is hiking and climbing mountains in the Sierras. That is the thing he truly loves.

A few weeks ago I did an open water swim across the Tred Avon River from Oxford, Maryland. The distance across the river was only a mile. But “only” is a relative term. As the group of us were walking along the street in Oxford to begin the swim, we passed some local residents standing in a yard and eyeing us curiously. One of them solemnly pronounced: “You people are crazy.”

“Crazy” is also relative. Diana Nyad, who swam from Cuba to Florida, sounds crazy to some. NFL linebackers and Navy Seals and skydivers and Mt. Everest climbers are only a few of those whose passions are far out of line with those of “normal” people. Just riding a motorcycle is judged to be crazy in some estimations. Riding one is okay with others, but riding without a helmet is not, or riding one up steep rocky hillsides is crazy. All is relative, and we each make up our own minds about adjusting the balance of risk and reward.

I do take risks, but not unmeasured ones. I drive my car carefully and avoid crazy drivers if I can. I get health checkups. I do not want my life ended by doing something stupid if I can help it. I started preparing myself to swim across the Chesapeake Bay in early January and kept at it religiously. Robert Matysek had also prepared, being a veteran of this event. He had completed a demanding open water swim in South Carolina just weeks before.

The bay swim was tough for me this year, tough as always. It took me almost three hours to finish. The waves kept pounding in my face and I swallowed no telling how much bay water. Toward the end, where you have to turn directly toward the incoming tide flow I could barely make progress to get past the bridge and around the jetty to the finish. I finished in position 551 out of the 628 of us who started.

I may never do better than this, but I will likely keep trying.  It’s like Christmas and July 4th and my birthday all rolled into one.