I am from the South: Tennessee, Kentucky, North Carolina. Perhaps Maryland, where I now live, is not usually counted as southern, but people here still comment on my southern accent. When I travel down home I do notice the accents there, and I find that instinctively I can revert back and talk just like the local folks. This is handy for blending in.

I was down in North Carolina recently and went out for dinner to a popular local restaurant. Very local. Great food and great prices, but nothing fancy like cloth on the tables or someone taking your order and bringing you your food. You get in line, study the menu on the back wall, and place your order at the counter. You pay right there. wait on your tray of food, and take it to the table of your choice. After you finish you clean up after yourself.

A large group was cleaning up after itself and leaving as I got my food. They had on red tee shirts identifying themselves as "Tea Party Patriots." They carried political signs and paraphenalia from their meeting. They seemed happy and enthused. It was the evening of a presidential debate, and I thought they might have been heading out to gather somewhere else and watch the debate together. 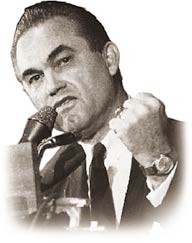 Having never been to a Tea Party party, I listened in on what conversations I could as I paid for my tray and sat down at my table. Close by my table near the door, the owner of the restaurant was shaking hands with two members who appeared to be leaders. The owner did not have on a red tee shirt, but he was clearly a supporter. I knew this for sure when I heard him say the following:

"You know, if we just had George Wallace, none of this would have happened."

He did not elaborate on what he meant by "this," nor did he need to.

As a southener, I knew exactly what he meant. His listeners nodded in agreement. Then one of them confided that although he certainly planned to vote for Romney, he wasn't sure things would be any different. I thought to myself that he had good reason to be unsure. The Romney of late is far removed from the one who participated in the 20 primary debates and cast himself as the most conservative choice in the race. The Tea Party man was right to wonder which candidate he would be putting into office.

In case you are not southern and uncertain about the coded reference to "none of this," let me tell you plainly what it was about. "None of his" meant "this black man in our white house." That is why the memory of George Wallace was invoked. He would have stood in the way of "this" like he blocked the doorway to the University of Alabama in 1963. He would have stood up for our way of life:

"It is very appropriate that from this cradle of the Confederacy, this very heart of the great Anglo-Saxon Southland, that today we sound the drum for freedom as have our generations of forebears before us time and again down through history. Let us rise to the call for freedom-loving blood that is in us and send our answer to the tyranny that clanks its chains upon the South. In the name of the greatest people that have ever trod this earth, I draw the line in the dust and toss the gauntlet before the feet of tyranny, and I say segregation now, segregation tomorrow, segregation forever." (From his first inaugural speech as governor of Alabama, 1963)

Wallace ran for president as a third-party candidate.  In a campaign speech in 1968 he appealed to his constituency:

"And it is a sad day in our country that you cannot walk even in your neighborhoods at night or even in the daytime because both national parties, in the last number of years, have kowtowed to every group of anarchists that have roamed the streets of San Francisco and Los Angeles and throughout the country. And now they have created themselves a Frankenstein monster, and the chickens are coming home to roost all over this country." "Yes, they’ve looked down their nose at you and me a long time. They’ve called us rednecks — the Republicans and the Democrats. Well, we’re going to show, there sure are a lot of rednecks in this country."

As a southerner, I dislike the term "redneck." I dislike the stereotype, and the fact that southerners are one of the few groups in the country that are still fair game for crude jokes that would be off limits for others. But Wallace did show in the '60's that there were a lot of them around. And the fond calling of his legacy made me realize there still are.