My father grew up poor in the mountains of western North Carolina. He was one of eleven children and the only one to finish high school, much less earn a Ph.D. Although he became a college professor, he never forgot his early struggles. Also he lived through the Great Depression, which those who did so always remembered. They seemed to carry in the back of their minds that this could happen again. They must not waste things. They must “save for a rainy day.”  Because of this I never heard my parents complain about the rationing during World War II. I did hear them complain about families in our town who were alleged to cheat on the rationing and get more than their fair share of rationed items.

My father would have listened with sympathy to all the complaints about wasteful government spending today. But he would not have failed to notice that many of the complainers are wasteful spenders themselves. The idea of people owning mansions all over the country and some with elevators not only for themselves but for their expensive cars, that would not have been well received. My dad never bought a car that was not a Chevrolet, and it was always the simplest and lowest priced model available. If it had a radio and windshield wipers and room enough in the trunk, it would do.

He made a large garden every year. We had fresh corn, peas, onions, tomatoes, squash, okra, beans of all kinds including soy, cabbage, carrots, beets, broccoli, turnips and their greens, collards and kale, garlic, lettuce, and always something new and experimental. The arrival of the Burpee seed catalog each year was welcomed with much interest. Before there was a grocery store called “whole foods” my parents made much use of them. Mother canned and froze food from the garden and dad helped. It was economical, and it was healthier.

Dad disapproved of cigarettes and soft drinks, which he considered wasteful. He also disapproved of the local bowling alley. If kids needed something to do, they could throw the football in the yard, which cost nothing. When his church voted to move and build an elaborate new building, he joined a group that split off and met in a large old house.

When Dad died at the age of 93, I was the only surviving member of his immediate family.  His oldest son had been killed in The War, and his second son had died in his late 40’s.  His wife had been gone for 20 years. As the remaing child I was left with the arrangements.

He had begun telling me some years previous that he wanted to be cremated. He reminded me again and again. He said an expensive funeral was a waste of money and made no sense. He did suggest that we could bury his ashes in the grave with mother and put his name on her headstone.

I was at a meeting in South Carolina when the call came. Dad had been in the nursing home for several years. His doctor said that his kidneys were failing and time was short. When I arrived he was still living but seemingly unconscious. I talked with him because seemingly unconscious patients often hear and understand even though there’s no sign of it. But his breathing slowed and slowed and after several hours of sitting by his bed he finally took his last breath.

As instructed, I arranged for the cremation. I also arranged with the cemetery to hold a short burial service at the grave and have the inscription done on the tombstone. Then I went to the funeral home to pick up the ashes.

They took me to a room that had shelves with all sorts of containers for such ashes. They were brass, pewter, silver, gold, ivory, marble, and other things. Some were plainer and some were fancier. They were nicely lit. The man said that I could take my time and pick out the one I wanted.

I thought of my dad whose earthly body was now a few handfuls of ashes. I thought of his life and asked myself what he would want me to do in this situation. It wasn’t hard to decide. I said to the man, “Now, if I don’t buy one of these containers, how do I get the ashes?”

So we met at Mother’s grave there in the cemetery, and there was a hole dug in the ground, and a small platform beside it covered with artificial grass. And on the artificial grass was a small, almost square cardboard box.

I laughed and I cried. My father would have liked this.

Yesterday I got welcome news. My entry into the lottery for the 2013 Chesapeake Bay Swim was drawn and I am now registered for the swim on Sunday June 9th. Some 1200 of us entered the lottery, and about 700 of us were drawn and allowed to register. This will be my fourth bay swim event. Review my experiences with the 2012 swim here. 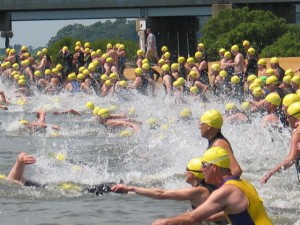 I ran across some pictures from previous swims.  The upper one shows a typical start from the beach at Sandy Point State Park on the western side of the bay. Do not imagine that I'm one of the mass of bodies surging ahead in the water.  I'm one of those in the back with arms folded, waiting for the crowd to thin out!

The lower picture shows a typical finish from the small beach at Hemingway's Marina on the eastern side of the bay. In between this and the start is 4.4 miles of water and, for me, over two and a half hours of navigating and swimming. In open water swimming, navigation assumes an all-important role, especially given the shifting tides and currents you experience during this crossing.

The start and finish beaches are both outside the Chesapeake Bay Bridge, 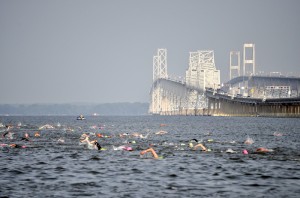 although most of the swimming takes place inside the two great bridge spans.

I am trying a somewhat different training strategy for this year's swim. Last year I started training in December for the June swim. I set a goal of swimming ten miles a week and pretty much kept with it.  I typically set the clock for 4:50 a.m. and was in the water at 6:00.  There was nothing wrong with this approach, but this year I am trying something different.

This year I plan to swim less miles but to do more intensive speed workouts and dry land exercises. I am doing 100 meter sprints as fast as I can go, resting 60 seconds, and then going again.  I am aiming to do a couple of miles worth of these a week, plus a variety of strength training for swimmers.  I may only put in 7 miles or so of swimming a week, but I think this may work well.

I'll know after June the 9th.