In the early '60's I was a seminary student in Louisville, Kentucky and pastor of a rural church about 70 miles away. Most of the church members were farmers, although some worked at Fort Knox and a few drove in to Louisville to work. I had come from neighboring Tennessee and was well accepted in the community. Like most of the men and young men, I was a hunter and fisherman. Like my father before me, I read "Field and Stream" magazine, and that is how my Honda story begins.

I noticed a classified ad in the back of Field and Stream. It showed a small two-wheeled vehicle with a luggage rack. A hunter was riding it down a trail in the woods and carrying a deer on the back. It looked like, and was, a small motorcycle, but it was described as a "trail machine." I was immediately curious and intrigued, for this was unlike anything I had ever seen. Motorcycles, at that time, were large and loud and ridden by disreputable characters, or so said the popular stereotype.

I  learned there was a store in Louisville, just one, where you could buy the Honda Trail Machine. It was Tinsley's Tire and Marine on Shelbyville Road, somewhat out of town. It sold boats and motors and tires, along with rifles and shotguns. My kind of place. And in the back of the store on the right side as you come in the front door, there were several of these new things. I found they had a trail out back and would actually let you ride one, which I did. And came back and did again. Then came back and bought one. 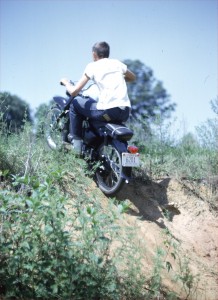 At the time I bought my Trail Machine it was the only thing Honda sold in the U.S.  People were puzzled about Honda because they never heard of it. But despite the lack of brand recognition, it was an immediate hit in the small community where I lived. Crowds gathered in our yard to see it and be taken for a ride. Lucky kids got to try riding it themselves. The owner of the store almost immediately drove to Louisville and brought back two of them, one for each of his boys. A migration of other buyers followed. To say these were a sensation is not to overstate.

Those of us who had them began riding in groups together and people watched from their porches as we zoomed by. Peer pressure built up on others. And at Tinsley's Tire and Marine, the Hondas began driving out the Evenrude and the Johnson motors, the Remingtons and Winchesters and Browning automatics, the Goodyear and Firestone tires, and the boats. Honda soon added newer and larger models. The marine store became a Honda place.

In 1966 Honda launched a national ad campaign that changed the way people thought of motorcycles. Its slogan was "you meet the nicest people on a Honda." It showed regular middle-class citizens, even women, riding these small two-wheelers. It created a market where none existed. The following is the best example:

As sales boomed and more and larger Honda motorcycles began to appear, other ads were remarkably effective. My favorite it the following one, showing how the Honda revolution took hold on the local minister.

Over the succeeding years and many thousands of miles, I rode a variety of Hondas including the 150, the 305 Super Hawk, the 450, the 750, and eventually an early Honda Gold Wing. Gold Wings are still made and sold by Honda today.

I was back in Tinsley's on one of those early days, maybe looking over the new 150 or something like that, and I heard a strange thing. They said that Honda was coming out with car.

A car??  We have all the cars we need — American cars. A Japanese car will never sell in this country. What on earth are they thinking?