Numerous U.S. State legislatures have passed or are considering what are termed "Religious Freedom Bills." These exempt the owner of a business from liability for refusing to do business in cases where the owner has a religious objection. When asked what problem these bills seek to address, the example often given is that of a Christian cake baker who is requested to bake a wedding cake for a same-sex couple.

It is assumed that the cake baker will gladly bake a cake for John and Mary, but objects to the wedding of John and Jim, or of Mary and Sally. The cake baker considers these relationships immoral and does not wish to be associated with them. Providing cake-baking services might be construed as giving approval to a sinful act. Apparently, in this person's church, you do not want to become known as a friend of sinners.

"Friend of sinners" . . . I remember that phrase from somewhere. Actually it was a term used against Jesus by his self-righteous critics (Matthew 11:19 and Luke 7:34). Jesus was known to associate with the most despised people of his day: prostitutes, tax collectors, lepers, adulterers, Samaritans, thieves, Roman occupiers, and street beggars. Jesus was also known to suggest that these friends of his had higher moral standing than his self-righteous critics. Which brings us back to the sinner-avoiding Christian cake baker.

Really? If you are in the cake baking business, you want to pick and choose your customers? You want to focus your moral judgment on each person who comes to the counter and consider if you should be associated with him or her? Maybe you don't want to serve Muslims or Buddhists or Jehovah's Witnesses? You don't want anything to do with sex offenders or former prison inmates? What about "sinful" (your judgment) women who have had abortions? Why not screen for use of contraceptives or foul language or immodest dress habits? When you aim to create a legal protection for moral judgments, the list goes on and on.

In the days of start-up Christianity, believers would not have turned to the State to enforce their morality. They would have baked their cake, or not, and accepted the consequences. Only now, in America, where professed Christians are 85% of the population, do they seek support of the State, affirming that they are, indeed, the State religion and deserving of special treatment. This is historically interesting in that a formally despised religious minority is now exercising its muscle as the religious majority. The persecuted have evolved to become the wielders of power, despite their roots.

I have a dear gay friend who recently married his same-sex partner of many years. As a confirmed heterosexual, I admit that to some confusion of feelings about homosexuality. I was not born to that lifestyle. But I acknowledge that my friend was, and I wish him well with his partner. I feel this is a Christ-like position to take on the matter. I also do not consider my heterosexuality to be morally superior to his. Apparently god creates some of us one way and some the other. I accept this.

That Christian heterosexuals will turn to government legislation to enforce their moral judgments on others is troubling to me.

Why not just bake the damn cake for whoever needs one?

As a former Southern Baptist myself, I was much interested in President Carter's reaction to recent actions by the Southern Baptist Convention. The SBC is the the largest protestant religious body in the U.S. 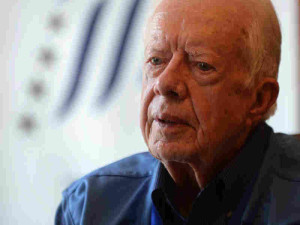 I have been a practicing Christian all my life and a deacon and Bible teacher for many years. My faith is a source of strength and comfort to me, as religious beliefs are to hundreds of millions of people around the world. So my decision to sever my ties with the Southern Baptist Convention, after six decades, was painful and difficult. It was, however, an unavoidable decision when the convention’s leaders, quoting a few carefully selected Bible verses and claiming that Eve was created second to Adam and was responsible for original sin, ordained that women must be “subservient” to their husbands and prohibited from serving as deacons, pastors or chaplains in the military service.

This view that women are somehow inferior to men is not restricted to one religion or belief. Women are prevented from playing a full and equal role in many faiths. Nor, tragically, does its influence stop at the walls of the church, mosque, synagogue or temple. This discrimination, unjustifiably attributed to a Higher Authority, has provided a reason or excuse for the deprivation of women’s equal rights across the world for centuries.

At its most repugnant, the belief that women must be subjugated to the wishes of men excuses slavery, violence, forced prostitution, genital mutilation and national laws that omit rape as a crime. But it also costs many millions of girls and women control over their own bodies and lives, and continues to deny them fair access to education, health, employment and influence within their own communities.

The impact of these religious beliefs touches every aspect of our lives. They help explain why in many countries boys are educated before girls; why girls are told when and whom they must marry; and why many face enormous and unacceptable risks in pregnancy and childbirth because their basic health needs are not met.

In some Islamic nations, women are restricted in their movements, punished for permitting the exposure of an arm or ankle, deprived of education, prohibited from driving a car or competing with men for a job. If a woman is raped, she is often most severely punished as the guilty party in the crime.

The same discriminatory thinking lies behind the continuing gender gap in pay and why there are still so few women in office in the West. The root of this prejudice lies deep in our histories, but its impact is felt every day. It is not women and girls alone who suffer. It damages all of us. The evidence shows that investing in women and girls delivers major benefits for society. An educated woman has healthier children. She is more likely to send them to school. She earns more and invests what she earns in her family.

It is simply self-defeating for any community to discriminate against half its population. We need to challenge these self-serving and outdated attitudes and practices – as we are seeing in Iran where women are at the forefront of the battle for democracy and freedom.

I understand, however, why many political leaders can be reluctant about stepping into this minefield. Religion, and tradition, are powerful and sensitive areas to challenge. But my fellow Elders and I, who come from many faiths and backgrounds, no longer need to worry about winning votes or avoiding controversy – and we are deeply committed to challenging injustice wherever we see it.

The Elders are an independent group of eminent global leaders, brought together by former South African president Nelson Mandela, who offer their influence and experience to support peace building, help address major causes of human suffering and promote the shared interests of humanity. We have decided to draw particular attention to the responsibility of religious and traditional leaders in ensuring equality and human rights and have recently published a statement that declares: “The justification of discrimination against women and girls on grounds of religion or tradition, as if it were prescribed by a Higher Authority, is unacceptable.”

We are calling on all leaders to challenge and change the harmful teachings and practices, no matter how ingrained, which justify discrimination against women. We ask, in particular, that leaders of all religions have the courage to acknowledge and emphasise the positive messages of dignity and equality that all the world’s major faiths share.

The carefully selected verses found in the Holy Scriptures to justify the superiority of men owe more to time and place – and the determination of male leaders to hold onto their influence – than eternal truths. Similar biblical excerpts could be found to support the approval of slavery and the timid acquiescence to oppressive rulers.

I am also familiar with vivid descriptions in the same Scriptures in which women are revered as pre-eminent leaders. During the years of the early Christian church women served as deacons, priests, bishops, apostles, teachers and prophets. It wasn’t until the fourth century that dominant Christian leaders, all men, twisted and distorted Holy Scriptures to perpetuate their ascendant positions within the religious hierarchy.

The truth is that male religious leaders have had – and still have – an option to interpret holy teachings either to exalt or subjugate women. They have, for their own selfish ends, overwhelmingly chosen the latter. Their continuing choice provides the foundation or justification for much of the pervasive persecution and abuse of women throughout the world. This is in clear violation not just of the Universal Declaration of Human Rights but also the teachings of Jesus Christ, the Apostle Paul, Moses and the prophets, Muhammad, and founders of other great religions – all of whom have called for proper and equitable treatment of all the children of God. It is time we had the courage to challenge these views.