You may have noticed that there are tall tree-like things appearing all over the landscape these days. They are not trees although they sometimes stand among trees. They are towers that hold the electronics to transmit our various signals for telephones, cellphones, television, radio, and who knows what else. They are shiny metal and easy to identify. And one of them can grow up almost overnight in a place there never had been one before. Sometimes they grow up from the ground and also they can sprout from the tops of buildings. They are not attractive. 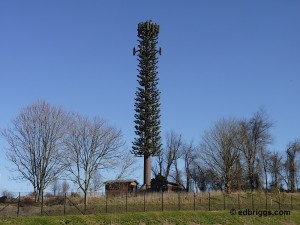 I guess someone decided they could be attractive, though, and might be better accepted as part of the landscape if they were. I can imagine the discussion in some corporate boardroom now. Different people presenting their innovative concepts for how to make these things attractive. And the winning plan was . . . to disguise them as trees! Brilliant, right? We already have lots of trees, so who would object to a few more? This can even be considered an environmental beautification plan, like planting wildflowers in the highway medians.

Now you may think I am making this up, because it sounds so ridiculous. I would have thought I was making it up until yesterday when I was driving along a new highway in Montgomery County, Maryland. Off to the right I saw this tree-like thing, but not a tree. I could tell instantly it was not a real tree, at least not any variety of tree I had ever seen before. It did have sticking out things with green stuff on them like a tree, but clearly fake. And the top of this tree–a dead giveaway–held the same shiny metal relay equipment as those other towers we see everywhere.

When I was a Boy Scout, I earned the Forestry Merit Badge which required you to identify a lot of trees by name. Sometimes we had to identify trees just from a piece of their bark. I have always liked trees and a home surrounded by them. I hate it that developers often start by bulldozing their subdivision land and removing all the trees. Then they build these expensive new homes out there in bare fields. Not for me. I’ll buy an older place with trees around it. And if I had a vote, I’d vote to outlaw the practice of killing off millions of nice young trees just to decorate and stand in our houses for a few days around Christmas. I was mad as hell about the State of California allowing logging companies to cut down almost the last of the Redwoods. I am tree-friendly, I guess.

The designers of the tree-disguised relay tower may have considered themselves tree-friendly also. They may have held focus groups where they showed pictures of their “trees” and paid people to give approval. They may have paid ad agencies to print slick brochures and plant advertising in strategic publications. They may have bought the votes of politicians for support.

We sadly live in a time when money can sell a lie for the truth, when money can substitute something fake for something genuine. We grow accustomed to advertising that is all about lying and fakery. A radio ad I heard the other day promised to eliminate your debt no matter what you owe or how much you earn. And some people will hear that and believe it, just as some people will accept these “trees” as trees.