2012 was the 25th anniversary of the Jim McDonald Lake Swim in Reston, VA. It was my third time to swim. I swam in the 5k (3.1 miles) event on Saturday, May 26th. There were also 1 and 2 mile swims on Sunday. I finished 68th out of 90 swimmers in the wetsuit division of the 3 mile swim with a time of 1 hour and 41 minutes.  My pace per mile was 32 minutes and 52 seconds. I was reasonably pleased with my effort, although I had hoped to finish with a pace closer to 30 minutes per mile. It was a nice day to swim, although warmer than you would have preferred. I had planned to do the Sunday swims but due to the water temperature wetsuits were not allowed and I chose to skip. In in 3 swims combined there were nearly 800 swimmers. Jim McDonald is a popular and premier event and ably managed by the Reston Masters Swim Club president Gordon Gerson.

The swim is held in Lake Audubon, a suburban lake not far from Dulles International Airport and surrounded by expensive lakefront homes. It is not a large lake, so the 3 mile swim required 3 laps around the course. Swimmers were placed in waves of about 10 based on their self-reported best times for a similar swim and distance. The staggered start did help to string out the packs of swimmers and minimize the collisions. 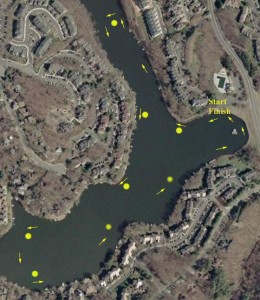 Since we swam counter clockwise and I breathe on the right, I had a constant view of the close shorelines, often including the decks or docks of the expensive homes and sometimes including some curious spectators. By the time I had completed three loops I had somewhat memorized the shoreline and had developed mental nicknames for some of the homes. One home had so many rooms I named it the British Boarding School for Boys. 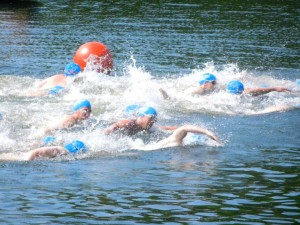 Open water swimming requires a balance between keeping your head down for swimming efficiency and raising it up enough to keep your bearings and stay on course. Swimming in the pool, you don't have these issues because you just follow the big black line painted on the bottom. Since the lakes and rivers have no such lines, you need to raise your head enough to see where you are and where you need to swim toward. Every time you raise your head you increase your drag and lose some speed. But if you don't stay on course you swim extra distance. This defines the term "tradeoff."

In a lake with little wind and waves, sighting to get your bearings is fairly predictable. In a bay or ocean it becomes a different matter. When you raise your eyes to look ahead they are barely an inch or so above the surface. So what if there's a wave just ahead of you when you try to get that momentary look? You see nothing but water, and have to try again. When you try again you may raise your head even higher and that degrades your swimming efficiency even more. Such is the challenge of open water swimming.

I have one swim event left before the challenge of swimming across the Chesapeake Bay – a 2 mile crossing of the Potomac River at the Harry Nice Bridge near Dalhgren, Virginia.