Being somewhat of a nature and wildlife photographer and in the general area, I decided to visit the Point Lookout State Park in Southern Maryland. For those not acquainted, this is a remote location where the Potomac River joins the Chesapeake Bay. It was a clear and windy day, and very peaceful. A very few sightseers were around, but mostly I had the place to myself. I did see a variety of wildlife: bald eagles, brown pelicans, ospreys, great blue herons, swans, and assorted ducks and seagulls. I had come to Point Lookout innocently, unaware of the dark history of the area. But history overtook me. 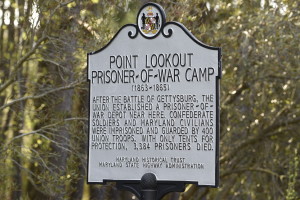 Almost immediately I noticed markers telling that a Civil War prison had been located here. The Union had established it after the Battle of Gettysburg, and it had housed more than 50,000 Confederate soldiers and Confederate-leaning citizens of Maryland. Some 4,000 had died and were buried here (the number is approximate because no accurate records were kept). There are no individually marked graves of these dead; all are buried in a common mass grave.

No prisoner of war camp has ever been a happy place. The prison at Point Lookout had no buildings for the prisoners, only military tents. Summers were hot and winters were cold. Water was contaminated and diseases were frequent. Food was scarce and poor in quality. It should be understood that neither the Union or the Confederacy was adequately prepared to handle prisoners of war, and that conditions on both sides were disgraceful. It is believed that 26,000 Confederates died in Union prisons, representing 12% of all captured. And some 15% of Union soldiers died in Confederate prisons. Clearly neither side has anything to be proud of. More information can be found here. 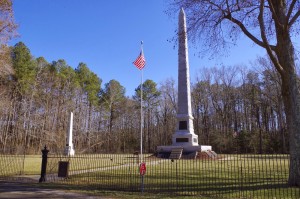 A cemetery for these Confederate dead is maintained at Point Lookout by the National Cemetery Administration of the Department of Veterans Affairs. Although called a cemetery, it is actually just a mass grave location; there are no tombstones or individually marked graves. The site is marked by an impressive 80-foot-tall monument with bronze tablets containing the names of those known to be buried here. There are 3,382 names.

None of this history was in my head when I first noticed the other memorial.  The other memorial also honors the Confederate dead and proudly flies their battle flag. I slowed the car and did a double-take (also popularly known as a WTF). Driving around in Maryland and Virginia you do notice the occasional Confederate flag displayed in someone's yard or in the back window of a pickup truck. But this was much more than a yard display. This was a large memorial area with the Confederate flag flying uppermost, surrounded by flags of the 13 states of the Confederacy. There is not an American flag in sight. And this is not South Carolina or Mississippi, this is in my own home state of Maryland. 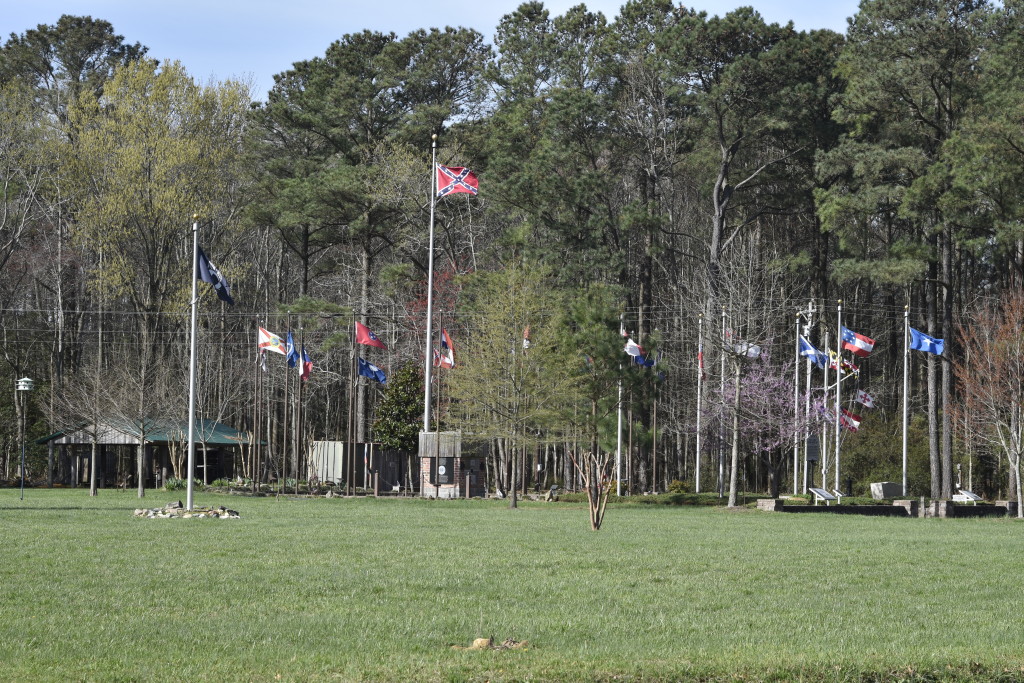 Then I discovered that although some trees separate the areas, the Confederate memorial is located right beside the Government memorial. So, in a sense, we have dueling memorials here.

The Confederate memorial is on private land and operated by a private group known as the Point Lookout Prisoners-of-War Descendants Organization. The group tried unsuccessfully to have the Confederate flag flown at the adjoining Government memorial. In walking around and reading the plaques, I gathered that as in much of American life these days, the issues of the Civil War still live on. Lincoln famously said that a house divided against itself cannot stand, but America still manages to stand even as our divisions seemingly increase.

The issue of soldier burials in any war is a potent one, but especially so in a civil war. The American civil war began with no plan for soldier buriels on either side. In 1864, a Confederate private from Virginia wrote a letter to his father as follows: "Dear Father. This is my last letter to you. I have been struck by a piece of shell and my right shoulder is horribly mangled and I know death is inevitable. I am very weak but I write to you because I know you would be delighted to read a word from your dying son. I know death is near, that I will die far from home and friends of my early youth but I have friends here too who are kind to me. My friend Fairfax will write you at my request and give you the particulars of my death. My grave will be marked so that you may visit it if you desire to do so. It is optionary with you whether you let my remains rest here or in Mississippi. I would like to rest in the graveyard with my dear mother and brothers but it's a matter of minor importance. Give my love to all my friends. My strength fails me. My horse and my equipments will be left for you. Again, a long farewell to you. May we meet in heaven. Your dying son, J. R. Montgomery,"

This letter is read in a PBS "American Experience" episode titled "Death and the Civil War." It illustrates the fact that if dead bodies were buried and graves marked, it was done by friends or relatives or fellow soldiers or by volunteers. Private Montgomery had made his own arrangements, but most soldiers could not. After the war, the Union launched an effort to identify the remains and mark the graves of Union soldiers. But although the war had officially ended, the effort did not include Confederate graves. Southerners interpreted this as revenge and retribution, not a promising step toward national reunification. It is estimated that about half of the 750,000 Civil War dead were never identified.

I did not come to Point Lookout to get involved in all of this. It was like walking along and tripping over something you didn't know was there.

8 Responses to “Unexpectedly, A Confederate Flag”