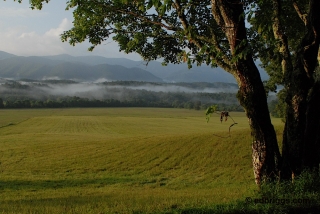 Cades Cove is a popular destination within the Great Smoky Mountains National Park, attracting over 2 million visitors a year.  I grew up in the nearby town of Maryville, Tennessee.  When I was a young Boy Scout there was no paved road into Cades Cove, although the land had been acquired by the government and most of the resident families relocated.  The remote cove had been settled by whites since the early 1800’s and prior to that by Cherokee Indians.  The national park has attempted to preserve some of the original buildings and provides exhibits related to the culture and history of the cove.  I have visited Cades Cove more times that I could even estimate, usually to enjoy the scenery and wildlife.