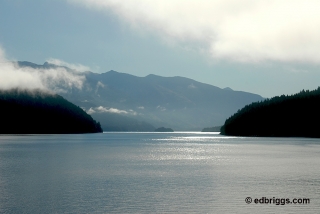 The present photos represent only a small portion of BC.  We flew to Vancouver, picked up a car, and took the first of several ferries to Vancouver Island and down to Victoria.  Leaving Victoria we spent time in and around Sooke and drove on up the coast as far as Port Renfrew.  From there we took an inland route to Ucluelet where we spent a number of days including trips up to Tofino.  Leaving the west coast we drove the Pacific Rim Highway through the beautiful territory around Port Alberni and on to Courtenay.  There we caught the ferry across the Inner Passage to Powell River and drove down the Sunshine Coast Highway to Sechelt.  Then it was on to the Horseshoe Bay ferry and across to the Sea-to-Sky Highway which was still being widened to accomodate the upcoming winter olympics.  After a short stay in Whistler we returned to Vancouver and the flight home, having made a great loop of a route.  But when you look at it on the entire map of British Columbia, it doesn’t look that great.  It covered just the southwestern corner of the province.  We are looking forward to returning and exploring more of this wonderful natural area.