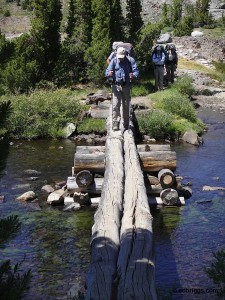 These pictures were taken on a backpacking trip in the Ansel Adams Wilderness about 20 miles from Yosemite National Park. This area is accessible from the John Muir and Pacific Crest trails.  The lakes are Garnett, Thousand Island, Ediza, and Shadow. A group of eight of us made this trek in August 2010, spending six days and camping in four locations.  The trails we took went above 10,000 feet and the higher peaks shown in the backgrounds exceed 13,000.  Mount Whitney (14,505 feet) is nearby to the south and is the highest peak in the U.S. except for Alaska.

I joined this trek with some apprehension due to my hip replacement just last fall. Hiking and climbing mountains in rough terrain with a 40 pound pack was certainly a test.  I am happy to report that the hip did quite well.

2 Responses to “The Sierras”