Harry Chapin wrote many wonderful songs based on stories he had heard or read about. My favorite concerned a dry cleaner from Dayton, Ohio: Mr. Tanner. He loved to sing. He was invited to sing at local events and people who heard him thought he should become a professional. He finally listened to them and invested all his savings to put on a concern in New York. The critics came and heard him and were not impressed. Mr. Tanner never sang again in public, only in private. But music continued to be his source of joy and satisfaction, even then. “He did not know how well he sang, it just made him whole” the song ends. 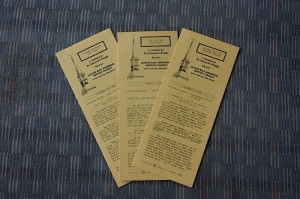 In my other life as a Baptist minister, the thing that gave me the most satisfaction was preparing and delivering sermons. Most of the other duties were “paying the rent” so I could preach. I don’t know how well I did this, popular opinion varied. But I do know that although it was certainly a labor and sometimes a struggle, it was personally meaningful.

When I came to my church in Silver Spring, I committed myself to writing sermons weekly and making them available in print to the congregation. Later on some friends wanted copies and I started a mailing list. The list grew to around 300 and the weekly mailings continued for over 15 years.

I am not as sure about God today as I was back then. But many of the themes of these sermons still resonate.