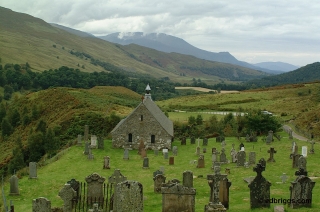 We visited Scotland shortly after the 9/11 attack.  The attack had cancelled our flight to London and we were one of the first flights out after service resumed.  London was on edge.  I was in a business meeting on a pleasant day where the windows had been opened to let in the cool breeze.  Without notice the breeze slammed shut a nearby door and some of us almost left our seats.

We took a train to Inverness, rented a car, and traveled westward through the lochs and to the coast.  We stayed in small towns and kept to the back roads.  This wasn’t easy for two reasons.  First, you drive on the wrong side of the road.  And second, the secondary roads are one lane with “pullouts.”  The protocol for who stops in or backs up to the pullout and lets the other car pass is difficult to decipher.  The rule seemed to be that the tourist always waits!  Then there are the sheep roaming around and often standing in the road.

The church show here is ﻿Cille Choirill and it dates to the 15th century.  Scottish chieftains are buried in the quaint cemetery.