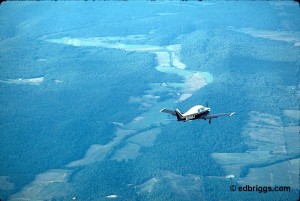 I am a licensed pilot with over 500 hours of flying time in single engine planes.  I would love to have rented and flown myself around the Everglades.  Unfortunately my license is quite old and I am not currently updated to fly.  So I did the next best thing.  I found a pilot with a Cessna 172 and hired him to take us on a tour.  The tour was memorable not only for what we saw from the airplane windows but also for flying in an aircraft just like I used to fly.  I guess you would call the 172 an antique.  Our pilot spends his winters flying in Florida and his summers flying in Alaska. A pretty good deal, if you ask me.

The airplane picture I’ve included here is not the plane we flew in.  It’s my old 1965 model Beechcraft Musketeer N2393J.  I made the picture over the Tennessee Valley from another plane while my buddy piloted 93J.