No, I'm not speaking about the Army or Navy or Marines or Air Force. I'm speaking about those who are waging the fight against Ebola, especially our fellow country men and women who volunteer to fight it at its source in West Africa.

Is it stretching a point to speak of their efforts in military terms? I think not. On our behalf, they are fighting a deadly enemy that could destroy us all unless stopped. Those who know about such diseases tell us that Ebola must be fought and defeated at its source, and that trying to hide from or evade the disease, while letting it spread, will be self-defeating in the end. If we stand off and let the rest of the world perish from the disease we will join them eventually. 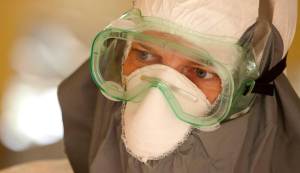 Working directly to save Ebola patients and protect others from infection is dangerous work. It is especially hard in poor countries where the medical infrastructure is lacking or inadequate. It is especially hard in places where ignorance and prejudice add to the risks and burden of fighting the disease. Some are saying that Ebola is a plague God has sent to punish homosexuality. Reportedly some Evangelical Christian missionaries have joined in this assertion. And by this bizzarre logic, to fight against the disease is to fight against the plan and will of God. This, then, would make the task not only dangerous but thankless.

The man or woman who performs a dangerous task but with the gratitude of others is in one situation. These include our war heroes. But the man or woman who performs a task that is both dangerous and thankless is in another situation entirely. And there can be heroes in either situation, but it seems to me that the greater heroes are those who risk and sometimes give their lives with little thanks and sometimes even blame.

If Ebola is to be defeated, we need to admire, respect, and support the heroes who volunteer to fight it. How many American doctors and nurses would volunteer their time to do this work in West Africa? How many? Surely not a very high percentage. If that is true, then it should increase our appreciation for those who are willing and brave enough to do so,

They are military heroes. They are fighting for us all.