When I was a boy and aspiring to become a man, I spent most of my summers at Boy Scout camp. For me, this was Camp Pellissippi on Norris Lake in East Tennessee. I began as a regular camper and later became a camp counselor and handicrafts instructor. I was also the camp bugler. I played Reveille to get them up, Assembly to form them into rows before the flag, and Mess Call to bring them to meals. Other calls sounded throughout the day, and Taps was played at the end, when they were obliged to go to sleep.

The highlight of my week at camp was the Saturday morning swim meet down on the waterfront. We swam in the lake, but mostly inside a floating wooden "crib" as it was called. Wooden boards formed the side walls and bottom of the crib, and it was supported in the water by empty oil drums. Water from the lake circulated freely in and out. It was much like a regular swimming pool, having diving boards, walkways, ladders, and life guards. The crib was attached to shore and held in place with cables, and these were adjusted as the lake level rose or fell.

My favorite swim meet event was the underwater swim. The goal was to swim farther underwater than anyone else. Those entered went one at a time and the order was determined by drawing straws or guessing a number or something similar. I became good at swimming distances underwater. I learned how to hyperventilate and store up oxygen in my system, and how to dive in with lungs full and exhale most grudgingly. Another camper was good as well, and one or the other of us always won the event. Often it came down to the order. If he went first, I had the advantage of knowing just how far I needed to go to beat him. If I went first, this advantage was his. 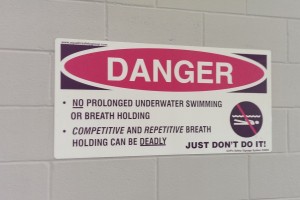 I'm reminded of those days when I go to my pool in Germantown, Maryland, and observe the dire warning about swimming underwater. I can only guess that no underwater swimming events are held at Boy Scout camps these days. In fact, I heard the other day that the Scouts have banned water guns at scouting activities. Apparently as a concession, they still allow the throwing of water balloons, but only those filled to the size of a tennis ball.

Nearby in Silver Spring, the police have picked up children for walking to school or to the neighborhood park without adult supervision, and their parents have been investigated by child protective services for suspected abuse or neglect.

In the Great Smoky Mountains National Park, there is a beautiful swimming hole at "The Y" on the road into the park from Townsend, Tennessee. For generations, young boys have climbed up the rocks and practiced diving into those mountain waters. Young girls and older people used to gather along the bank on the other side and watch. The braver boys climbed up higher and made a bigger splash. Recently the Park Service has banned this activity and put up a sign warning of consequences if you do it and get caught.

I know that there is more risk of my getting hurt from riding my bicycle than from sitting on the sofa watching daytime television, but I would like the choice to be mine, not someone else's. I know that going out in my kayak is more dangerous than shopping at the Safeway, but don't tell me I can't go out. Indeed there are activities whose risks I would not assume: skydiving, BASE jumping, ice climbing, scuba dive cave exploring, and others often termed "extreme." But I would hate to see us tell those people, no, they must not do those things. Or children walking to and from school. Or swimmers swimming underwater.

I would rather live in a land of the free.