Each weekday morning I go to the swimming pool to, well, swim.  I usually swim three miles, which takes me about an hour and a half. The lanes at my pool are 25 yards long. It takes 5,250 of these yards to make a three mile swim. That's 105 laps, a lap being down to the end and back. Often I get in the water and swim non-stop. Now many of my fellow swimmers swim faster than me, but not many swim longer or farther. I catch views of others as I swim. Many do a few laps and then hang on the sides of the pool talking. Many of them spend more time talking in the water than swimming in it. When I observe this, I feel proud to be such a dedicated swimmer. 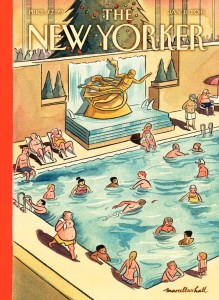 These are my fellow swimmers. But there are a lot of others taking up water space in the pool who are not swimmers. I call them the splashers. They get in the water to wade, chat, clap, bounce, float, splash, act silly, and dance around. Often they do these things in groups and with an overweight leader, and to loud and lively music. I think they pay money to join these groups, and they probably imagine they're getting in shape by doing this. From the looks of most of them, they have a long way to go. The New Yorker captured this phenomenon in a recent cover illustration. Count the number of individuals who are actually swimming, despite the inspirational image on the front wall. (click to enlarge the picture and better appreciate)

The men's locker room at our pool is a communal place. There are no privacy curtains or individual shower stalls. We dress and undress and shower together; we hear and overhear conversations; we may not speak with others, but we do hear and observe things.

On morning I was there getting dressed and I heard loud panting and wheezing. I looked around the corner and there was a large, overweight, out-of-shape man trying to put on his clothes. Even putting on socks was a great effort for him. His breathing was so labored that I wondered how he could swim at all. Lazy bastard! I imagined him lounging on the sofa, watching TV, and eating potato chips and ice cream and drinking beer. I assumed he was one of the splashers. Why did he even bother coming here?

Then some days later I was in the locker room and heard the same panting and wheezing. It was unmistakeable. Him again.

Then the man began talking with another man. His talking was labored, interspersed with the panting and wheezing. But I listened because the conversation was unexpected and startling, and it ended up making me feel ashamed.

The man explained about his brain surgery, and almost dying, and now he has all these health problems, including the loss of his short term memory. He apologized for making so much noise. And I felt like apologizing for my recent thoughts.

The next time I had a chance, I introduced myself to this man. He explained the same things to me about his surgery and his struggles. He once had had a good job, he said. Meaning he once had been normal like the rest of us. The surgery had taken all of his savings, he said. And I said that was too bad and I was sorry. But he smiled and said it was alright, as if to sooth my feelings. He said he was thankful he had the money, and it was worth every penny.

I learned that he is not a splasher after all. He does try to swim, though not very fast or very far. He does what he can.

And I was greatly shamed by this, because my health is mostly good, and my savings are unspent on brain surgery, and I do not struggle to put on socks. I sensed that although I may swim fifteen miles in a week, this man's effort is greater than mine.

I've spoken with him several times since then. And what I've learned is that he is grateful for the life he has, and does not wish to be pitied.

When men leave the locker room at our pool, friends say: "have a good day." And when we say this to the brain surgery man, he always has the same reply. He says, every day is a good day.

So how do you explain the fact that with all his pain and misfortune, this man lives with more gratitude than most of us do?