Nose hair is on a list of things we avoid mentioning in polite society. Most people think of it as an unneeded relic of our ancestory or as a defect in the design of our bodies. Medical people may tell us that hair in the nose protects us against environmental threats such as germs, fungus, and spores. But appearance usually trumps health concerns. The celebrities whose appearance we admire and emulate do not have nose hair showing. 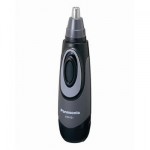 I suppose you could trim nose hair by using a set of small, sharp scissors. That option is not appealing to me. I do not fancy sticking small sharp scissors up my nose and scissoring blindly. So I looked for something powered by batteries with an assurance of protection for my sensitive areas.

An Amazon.com search on “nose hair trimmer” will return 743 buying choices as of today. I have not tried all 743. But I have tried several, and I can put them in two categories. The first is a trimmer that trims effectively but scares the heck out of you and often grabs onto things and makes you jerk. It gets the job done but you are never comfortable with the way it works. You keep saying to yourself that there must be a better way, and back you go browsing through the 743 choices.

The second type of trimmer is the opposite of the first. It is comfortable and reassuring, but unfortunately it does not trim very well. Given a lot of time and persistence you may eventually do the job with it, but the effort is frustrating. You keep saying there must be a better way. And back you go browsing through the 743 choices. This could be an endless loop.

The dilemma this illustrates is common to our society in particular and our human condition in general. Consider the following:

In a perfect world we wouldn’t have to deal with these dilemmas. But there is no perfect world. Or nose hair trimmer.