Every open water swim is different from every other. The factors that make this so include the setting, the weather, the event, and the varying condition of the swimmer. The setting for my June 24th swim in Lake Chatuge was idyllic. A meandering mountain lake surrounded by natural beauty and blessed by clean water and almost perfect weather. A well run event with only 114 swimmers, and those a mix of fast and leisurely paces. I was mostly in good condition for the five kilometer race and finished strongly with energy to spare. Unknown to my strong finish, however, I had failed to hydrate properly for this event and paid penalty which I’ll describe shortly. 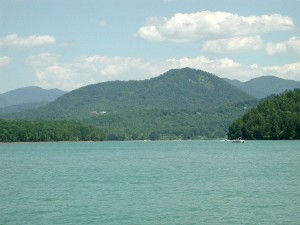 Lake Chatuge is on the Hiawassee River and lies partly in Georgia and North Carolina. The closest towns are Hiawassee GA and Hayesville NC. The swim begins in Georgia and ends in North Carolina, crossing the state line about halfway up the north-heading course. This swim is a long-standing annual event (its 13th year) sponsored by the Great Smoky Mountains Triathlon Club . 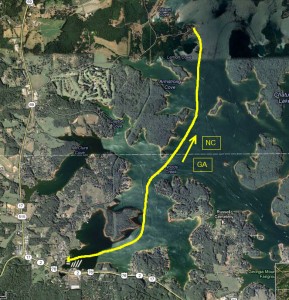 As you can see, Lake Chatuge has many coves and islands and getting anywhere on the lake involves navigation. I had studied the course on Google Earth, but the swimming view is very different from the overhead view. So I listened very carefully to the race director as he described the course landmarks and navigation pointers. When he asked how many swimmers had done this race before, more than half of the hands went up. This gave me some assurance that if I stayed with the group I would not wander off course. During the swim I often checked to see that there were swimmers on my right and on my left. In doing this I was often surprised to see how widely apart they were. I am more used to swims where everyone swims pretty much in the same track. Swimmers were definitely more spread out here.

Swimmers were also more spread out in terms of time to complete than I am used to. The winning swimmers finished in little over an hour. Some swimmers actually took three hours to complete the course. My time was about in the middle. My time was an hour and forty eight minutes. Sixty four swimmers finished ahead of me and 49 finished behind me. The overall winner was 15 years old and finished in an hour and twelve minutes.

It takes a lot of strokes to swim three miles. Since I often count strokes for known distances in the pool, I know the number approximately. For the Chatuge distance it would have taken about 2,000 swimming strokes with each arm.

I am sometimes asked if swimming long distances isn’t boring. I assure people that it isn’t. You are actually pretty busy. Although the swimming strokes are repetitive, you have to adjust them to constantly changing conditions. Every five strokes or so you need to check your bearings and make adjustments. You approach other swimmers, or they approach you, and you must figure how to react and not lose time or effort. If you have spare seconds you use them observing the sky, the birds, the boats, the landscape, and your fellow swimmers. And of course you are always on alert for hazards. And those include any signs of bodily weakness or injury, anything that does not feel right and is concerning. My left shoulder has a way of gaining my attention now and then and reminding me that it isn’t as powerful as the right one, although I expect it to be.

A NASCAR driver goes round and round a closed track, sometimes for hours, and all alone is her vehicle. Is this boring? I imagine those drivers would tell you no, that they stay very busy, and that every lap brings something different. So it is with the long distance swimmer.

I mentioned earlier that I had one problem with this swim. I had been traveling before the swim and did not observe my usual pre-race diet and hydration routines. Although I felt good and swam strongly, I became dehydrated. This did not manifest itself until I had finished and was out of the water. I noticed that my vision was blurred and I was unsteady, especially upon standing up after sitting. Fortunately my wife drove our car, but upon arrival at the hotel I passed out momentarily after getting out of the car. This caused some excitement on the part of my wife and a young physician/swimmer who happened along. In a couple of hours I was just fine. I must do better about hydration in the future, regardless of the circumstances.